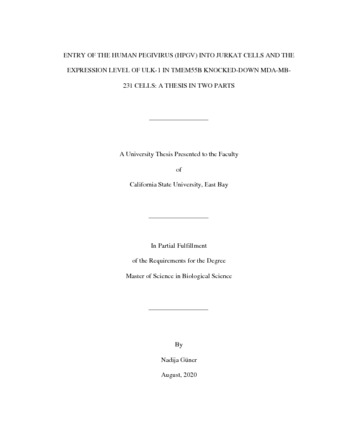 Entry of the human pegivirus (HPgV) into Jurkat cells and the expression level of Ulk-1 in TMEM55B knocked-down MDA-MB-231 cells: a thesis in two parts

Human Pegivirus (HPgV) is a lymphotropic virus which causes infection in T and B lymphocytes, including B cells, CD4+ and CD8+ cells. Human Immunodeficiency virus (HIV-1) is the causative agent of Acquired Immunodeficiency Virus (AIDS) and shares the same modes of transmission as HPgV. A relationship between HIV-1 and HPgV was observed that is very significant which involves a lowered HIV-1 viral load, a higher CD4+ T cell count and a better reaction to HAART therapy which ultimately leads to a slower progression to AIDS in comparison to monoinfected HIV-1 patients. The form of entry that HPgV could potentially use to infect human white blood cells (WBCs) are two forms of endocytosis or viral fusion. Prior to determining the form of entry, infectious virions had to be generated. Verification of the plasmid (pAF121950) took place using a Diagnostic restriction digest. Plasmid isolation and linearization followed by proteinase k treatment took place. Approximately 8 months, were spent on troubleshooting Phenol chloroform extractions which included the various steps and reagents. Vacuum Grease and Glycogen were incorporated into the method which significantly improved the yield. The purified in vitro transcription product (IVT) was verified through an agarose and bleach gel. Fluorescence-activated cell sorting (FACS) analysis was unable to be completed due to cell death of the infected cells. The cell death could have attributed to the various reasons which range from the transfection method, cytotoxicity from the transfection agent or contamination of the RNA or reagents used during the transfection. A different transfection method such as Calcium phosphate, Diethylaminoethyl (DEAE)- Dextran or electroporation could be employed to generate infectious virions. Autophagy is an intracellular process involving the cellular breakdown of cytoplasmic cellular substances or cellular organelles that become non-functional or lose their integrity over time. The most common form of autophagy is entitled Macroautophagy, which involves the formation of an autophagosome, which is a double membrane bound vesicle generated by using cytoplasmic components, which will eventually entrap cytosolic components. The autophagosome is a very complex structure that uses components not only within the cytoplasm, but from cellular membrane components as well. For example, TMEM55B is a Type I phosphatidylinositol 4,5-bisphopshate 4 phosphatase, which is located near lysosome and endosomal membranes, but whose ultimate function remains to be elucidated. Thus, it’s role in lysosomal entry is up for debate. It may be involved in modifying the lysosomal membrane by altering lysosomal integral (or potentially peripheral) proteins. One such modifying protein is the serine- threonine kinase, Ulk-1, one of the principal autophagy related genes (Atg). In addition, Ulk-1 is an initiator of Macroautophagy that brings Atg proteins to a region where the formation of an autophagosome occurs. In addition to autophagosome regulation, signals upstream of the pathway allow Ulk-1 to activate based on the nutrient status of the cell. Thus, it is of interest to look at the role TMEM55B has in Ulk-1 expression. A knock- down experiment using the bacterial Crispr-Cas9 system will be employed to reduce the expression level of TMEM55B and look for alterations in Ulk-1 expression. Four different small guide RNAs (sgRNAs) were generated using the Benchling software. The Target Sequence Protocol, provided by Zhang et al. was used to generate the modified Crispr-Cas9 construct. Sanger sequencing was performed to validate the construct transfected into triple negative breast cancer cell line, MDA-MB-231 cells by Calcium Phosphate transfection. Two transfection attempts lead to 100% cell death following puromycin selection indicating a unsuccessful transfection. This technique was compared to siRNA technology. The expression of TMEM55B was reduced by 50%, which was completed by Margaret Hackney. Due to problems with Crispr-Cas9, the MDA-MB-231 knocked- down cells, created by Mrs. Hackney were used to determine the expression of Ulk-1. There was no difference in expression that was noted in Ulk-1. Still, this was only determined on a transcriptional level and will need further inquiry to determine if it is based on the translational level and level of TMEM55B inhibition which was only at 50%.