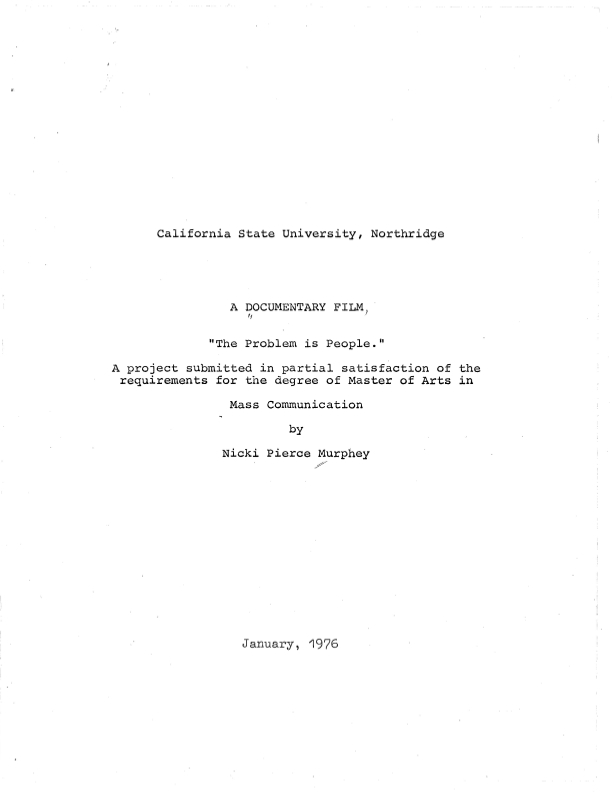 A documentary film, "The Problem is People"

This thesis project is an attempt to write, produce and sell a 16mm half-hour documentary film. The choices made on subject matter, film stock, backing, and personnel revolved around .the decision to aim for a highly saleable product. Analyzing the films now seen on Los Angeles television as documentaries, I began by compiling a list of subject matter. The category "news documentary" certainly covers a wide range of topics and most often verges on consumer issues. With no dearth of movie stars and television personalities at close proximity in Los Angeles, I planned to ask a "name" person to narrate, thus increasing the possibilities of selling the film. Again, I noted this technique while watching the documentaries that are sold, how frequently stars narrate them. Money is the main problem in filmmaking. It is a very expensive art form unless you use 8 mm, black and white film, and do all the work yourself. But to make a film that is air quality, television stations figure anywhere from ten to twenty thousand dollars is fair for half-hour documentaries. So it became important to find a backer to absorb some or all of the costs. Whereas contractual arrangements can often be made with the crew like sound engineers, cameramen, editors, writers and assistants, there is one area where cash is all that gets the work done. When it comes to buying the film stock, processing it, making work prints, answer prints, dubbing the sound, mixing tracks, and edge-coding, the laboratories in Los Angeles turn a deaf ear to struggling filmmakers offering percentages of the gross. (See more in text.)