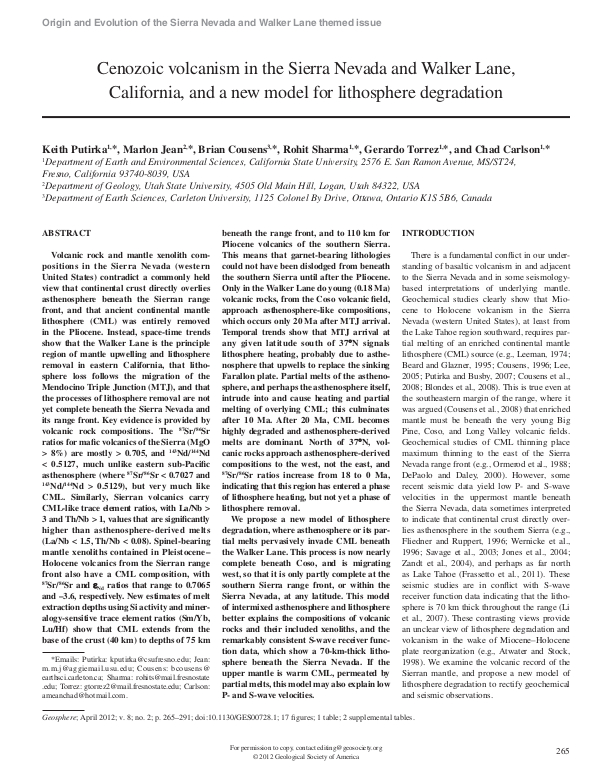 Cenozoic volcanism in the Sierra Nevada and Walker Lane, California, and a new model for lithosphere degradation

Volcanic rock and mantle xenolith compositions in the Sierra Nevada (western United States) contradict a commonly held view that continental crust directly overlies asthenosphere beneath the Sierran range front, and that ancient continental mantle lithosphere (CML) was entirely removed in the Pliocene. Instead, space-time trends show that the Walker Lane is the principle region of mantle upwelling and lithosphere removal in eastern California, that lithosphere loss follows the migration of the Mendocino Triple Junction (MTJ), and that the processes of lithosphere removal are not yet complete beneath the Sierra Nevada and its range front. Key evidence is provided by volcanic rock compositions. The 87Sr/86Sr ratios for mafic volcanics of the Sierra (MgO > 8%) are mostly > 0.705, and 143Nd/144Nd < 0.5127, much unlike eastern sub-Pacific asthenosphere (where 87Sr/86Sr < 0.7027 and 143Nd/144Nd > 0.5129), but very much like CML. Similarly, Sierran volcanics carry CML-like trace element ratios, with La/Nb > 3 and Th/Nb > 1, values that are significantly higher than asthenosphere-derived melts (La/Nb < 1.5, Th/Nb < 0.08). Spinel-bearing mantle xenoliths contained in Pleistocene–Holocene volcanics from the Sierran range front also have a CML composition, with 87Sr/86Sr and ɛNd ratios that range to 0.7065 and –3.6, respectively. New estimates of melt extraction depths using Si activity and mineralogy-sensitive trace element ratios (Sm/Yb, Lu/Hf) show that CML extends from the base of the crust (40 km) to depths of 75 km beneath the range front, and to 110 km for Pliocene volcanics of the southern Sierra. This means that garnet-bearing lithologies could not have been dislodged from beneath the southern Sierra until after the Pliocene. Only in the Walker Lane do young (0.18 Ma) volcanic rocks, from the Coso volcanic field, approach asthenosphere-like compositions, which occurs only 20 Ma after MTJ arrival. Temporal trends show that MTJ arrival at any given latitude south of 37°N signals lithosphere heating, probably due to asthenosphere that upwells to replace the sinking Farallon plate. Partial melts of the asthenosphere, and perhaps the asthenosphere itself, intrude into and cause heating and partial melting of overlying CML; this culminates after 10 Ma. After 20 Ma, CML becomes highly degraded and asthenosphere-derived melts are dominant. North of 37°N, volcanic rocks approach asthenosphere-derived compositions to the west, not the east, and 87Sr/86Sr ratios increase from 18 to 0 Ma, indicating that this region has entered a phase of lithosphere heating, but not yet a phase of lithosphere removal. We propose a new model of lithosphere degradation, where asthenosphere or its partial melts pervasively invade CML beneath the Walker Lane. This process is now nearly complete beneath Coso, and is migrating west, so that it is only partly complete at the southern Sierra range front, or within the Sierra Nevada, at any latitude. This model of intermixed asthenosphere and lithosphere better explains the compositions of volcanic rocks and their included xenoliths, and the remarkably consistent S-wave receiver function data, which show a 70-km-thick lithosphere beneath the Sierra Nevada. If the upper mantle is warm CML, permeated by partial melts, this model may also explain low P- and S-wave velocities.