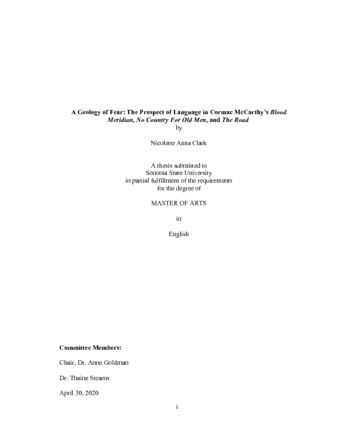 A Geology of Fear: The Prospect of Language in Cormac McCarthy’s Blood Meridian, No Country For Old Men, and The Road

Violence is a fundamental truth in the works of Cormac McCarthy. More than just violence for the sake of violence, McCarthy employs violence in a way that is productive within his works: Blood Meridian: Or the Evening Redness in the West, No Country for Old Men, and The Road. This study examines the productive nature behind violence, which I argue, manifests through language. Beginning with Blood Meridian, McCarthy’s judge appropriates language through the manipulation of referents re-shaping truth, informing all violence throughout the novel. No Country For Old Men brings us to the language of the law and how it caters to the objectivity of the law, using it as a guiding principle, without the scope of morality. Through the characters of Chigurh and Flannery O’Connor’s The Misfit, we are asked to judge the validity of the state’s versus the vigilante’s truth, which are ultimately synonymous. Leaving us with Sheriff Bell, who relinquishes his position as sheriff because he is unwilling to be an accessory to a morally corrupt system. Then, in The Road, the ultimate violence occurs through the disintegration of language, resulting from the indifference of man. With the perspective as perceiver of violence throughout this range of McCarthy’s works, we are in the position to judge this violence and consider its productivity. Its productivity lies in the fact that great violence must occur for redemption to manifest—as in The Road, the preciousness and life of language is not discernible until it faces its own mortality.