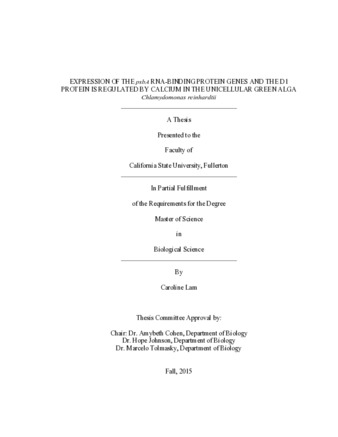 In the unicellular green alga Chlamydomonas reinhardtii, the D1 protein, which is the main electron acceptor of photosystem II, is encoded by the chloroplastic psbA gene. Translation of D1 is regulated by a set of nuclear-encoded RNA-binding proteins (RB38, RB47, RB55, and RB60), which form a complex and interact with a stem-loop structure in the 5’-untranslated region of the psbA mRNA. Earlier work showed that the genes that encode two of these RNA-binding proteins, rb38 and rb60, as well as the psbO gene, which encodes the OEE1 protein within the Oxygen Evolving Complex, are regulated by red light. This red-light induction involves calmodulin (CaM), a ubiquitous calciumbinding protein that is found in all eukaryotic cells. Thus, it was hypothesized that calcium (Ca2+) would also be involved in this red-light signaling pathway. To test this hypothesis, cells that were grown in the dark in Ca2+-free media were either exposed to varying amounts of Ca2+ or the Ca2+-channel inhibitors, nifedipine and neodymium (Nd3+), in the presence of Ca2+. Treatment with Ca2+ had a dose-dependent effect on rb38, rb60, and psbO mRNA accumulation, but not on rb47 accumulation, with maximal accumulation occurring in response to 10-6 M free Ca2+. This Ca2+-induced accumulation was reduced with the addition of the Ca2+ inhibitors. A similar pattern was not however reflected in the protein levels. RB38, RB47, RB60, and OEE1 accumulated equally across all treatments. An increase in psbA mRNA accumulation was seen only after darkgrown cells were treated with Ca2+ concentrations above 10-5 M, and no change was recognized after a 10-6 M treatment or in presence of the inhibitors. Both Ca2+ and the inhibitors did however affect D1 accumulation, with the inhibitors reducing the increase that was recognized after a 10-6 M Ca2+ treatment. While this study adds to our understanding of Ca2+ acting as a secondary messenger in the red-light signaling pathway, and presents some interesting implications on future work in red-light signaling and D1 synthesis in C. reinhardtii, more research however is needed to dissect the pathway fully.