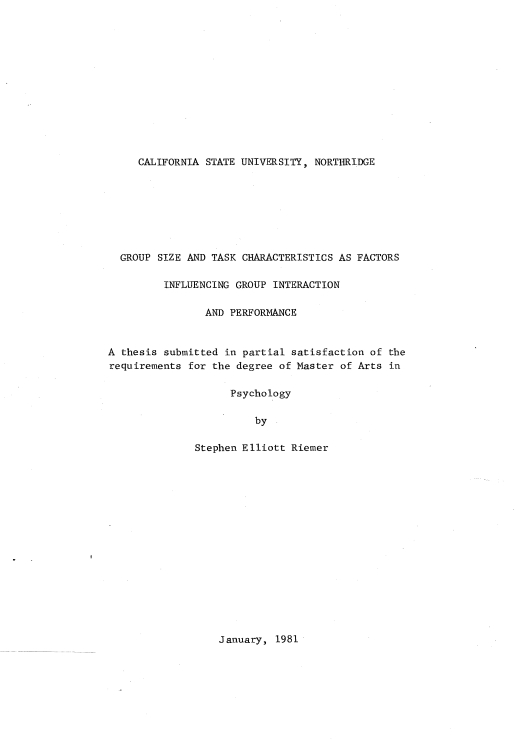 This study investigated the effects of group size (groups of Size 2, 4, and 6), task type (production and problem-solving "intellective" group tasks), and trials on group interaction and performance. The interactive behavior of group members was recorded as they worked on the "intellective" tasks which required a written solution. The group's performance was measured in terms of the characteristics of the solution. The results indicated that task type significantly affected group performance. Specifically, solutions from production type tasks were characterized by high means on three solution dimensions, or characteristics: length, originality, and quality of presentation. These solutions showed little action orientation or issue involvement, and tended to be pessimistic in outlook. Problem-solving tasks yielded solutions which were high in action orientation and issue involvement. They were also optimistic in outlook, but were low on length, originality, and quality of presentation. Task type was also shown to be an important determiner of group interactive behavior. Specifically, production type tasks were characterized by high answer structuring, repetition, and disagreement. Problem-solving tasks elicited significantly more clarification. Group size did not significantly affect group performance, nor did it have a significant effect on the group interaction process. While trials did not significantly affect group performance, significant changes were found in group interactive behavior across trial sessions. On the fourth trial groups agreed less, showed less tension, and interacted less overall. Conversely, on the first trial group members showed a greater amount of tension. More structuring of the answer and agreement among group members occurred on the second trial. Additionally, on the second trial, overall group activity was highest. Across all groups, the greatest proportion of interactive activity was in task relevant behavior as opposed to social-emotional behavior.