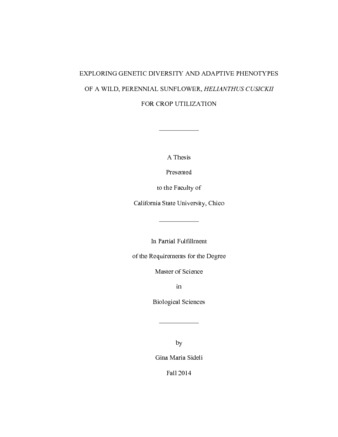 Perennial grain crops are presently offered as a solution to current agricultural problems such as soil erosion, excessive water use, and water quality degradation while supporting ecosystem services. A longer growing season allows for a substantial root system to develop for the assimilation of nutrients and water at greater depths, minimizes nitrogen loss and conservation of water. A wild, perennial sunflower, Helianthus cusickii, close relative to the domestic sunflower, Helianthus annuus, has the potential to offer beneficial alleles for crop improvement to H. annuus. In particular, Helianthus cusickii could be a source of genes for drought tolerance, since it is found on dry, rocky sites in low rainfall regions and has a distinctively robust taproot. Here I evaluate the agronomic value of H. cusickii and whether it merits further research in sunflower crop improvement. Specifically, I characterize genetic variation via microsatellites within and among populations of H. cusickii and phenotypically assess important, agronomic traits in field trials. A study of nine populations demonstrated H. cusickii had a considerable amount of diversity and low population structure with He = 0.47 and FST = 0.247. Growth performance studies showed that H. cusickii did not adapt well under field conditions in southern Kansas during two field seasons. These results did indicate that H. cusickii had greater vigor and survival in an unirrigated field with earlier planting, rather than an irrigated field with later planting, however this also resulted in smaller sized plants. Comparison of annual and perennial root traits showed an average root:shoot ratio of 0.735 in H. cusickii, and an average root:shoot ratio of 0.442 in H. annuus. Interspecific crosses (H. cusickii x H. annuus) between 23 plants resulted in the formation of 20 seeds, however plants grown from the hybrid seed did not reach anthesis. I conclude, based on these experiments that H. cusickii holds potential for use of donor genes in domestic sunflower cropping systems. As this research served as a preliminary analysis of this wild perennial sunflower, further studies would be needed in order to assess plant water relations and the most beneficial quantitative trait loci. Keywords: Helianthus annuus, Helianthus cusickii, phenotyping, genetic diversity, germplasm-bank accessions, microsatellite markers, perennialization