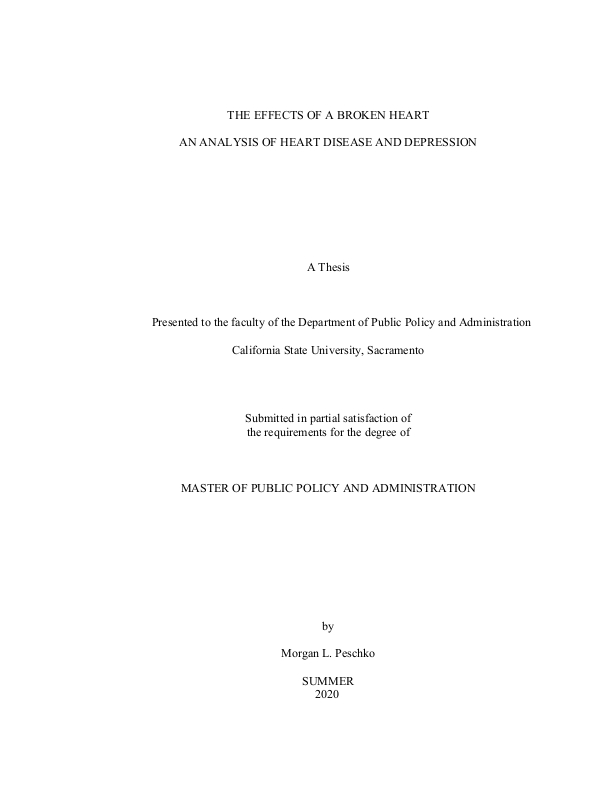 The effects of a broken heart: An analysis of heart disease and depression

The United States has the most expensive health care system of the world’s developed nations. As of 2012, the U.S. spent $8,233 per person, per year on healthcare, accounting for nearly 18% of the Gross Domestic Product. In California, the healthcare spending growth from 2009 to 2014 outpaced that of the national total. Heart disease was the leading cause of death in the U.S. in 2010, accounting for 25% of all mortalities, and an estimated 17.3 million U.S. adults had at least one major depressive episode in 2017. Systemic improvements to the healthcare system would allow more individuals to get basic care, ensuring that government resources could be spent in ways that result in a higher return on investment. Existing literature provides a detailed review of depression factors, the connection between heart disease and depression, and outcomes for heart disease patients with depression. Research indicates many factors can affect the expression of depressive symptoms, including a loss of control. Multiple studies examining heart disease and depression report that individuals with heart disease are more likely to report depression than are individuals without heart disease. Moreover, heart disease patients with depression are more likely to visit the emergency room than are heart disease patients without depression. Early intervention may reduce costs and strain on the healthcare system. However, none of the existing research attempted to control for the endogeneity inherent between heart disease and depression. Endogeneity occurs when the change in a variable is related to other factors that influence the dependent variable and are not accounted for in the model. I ran regressions with two models to understand the relationship between heart disease, heart failure, and depression. The first binary regressions did not account for endogeneity, and the results indicate that as heart disease worsens to heart failure, the likelihood of being depressed increases significantly. I ran additional probit regressions to account for endogeneity, and found a similar positive relationship indicating the likelihood of being depressed increases as heart disease worsens to heart failure. However, when controlling for endogeneity, the effect of the relationship between heart disease, heart failure, and depression became much smaller. There is an inherent challenge in teasing apart the root causes for heart disease and depression due to the intricate relationship between the two diseases. I used fast food consumption and soda consumption variables to control for endogeneity in my regressions. Poor diet is correlated with higher rates of depression, but there is often not a clear distinction in the causal chain. There is a large, well-established body of work highlighting the role diet plays in heart health, and research supports that a traditional Mediterranean-type diet reduces the incidence of heart disease. Because unhealthy lifestyle factors such as poor diet play an important role in the onset of heart disease, which is associated with an increase in the incidence of depression, it is important that policymakers think about how to help make healthier lifestyle habits accessible to all. The relationship between heart disease and depression is complex, but the lifestyle factors that increase the incidence of both are clear. I recommend an increased focus on promoting the integration of healthy lifestyle habits such as eating nutritious foods into the lives of all Californians. Consuming fruits, vegetables, whole grains, fish, olive oil, low-fat dairy, and antioxidants, and avoiding fast food and soda, should be an affordable and available option for every person in California regardless of location or circumstance.