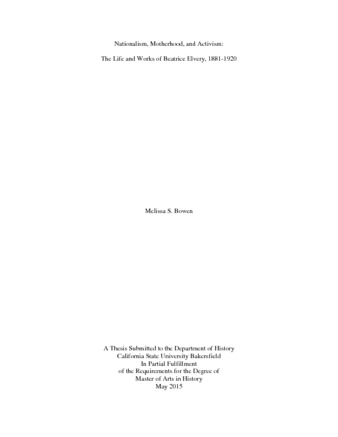 Nationalism, motherhood, and activism: the life and works of Beatrice Elvery, 1881-1920

Elvery’s life illustrates how the art world interacted with Ireland’s path to independence and acts as an example of female agency during a time when women struggled for their own independence. Beatrice Elvery’s middle-class status kept her out of elite circles, but it also meant that she was a mere acquaintance of the Catholic working class. This liminal position gave Elvery a unique understanding of the world around her, and thus provides historians with an inimitable appreciation of the era. Furthermore, the juxtaposition of the Irish Female Symbol against Ireland’s ideology of “the virtuous woman,” which stressed domesticity, motherhood, and Catholic devotion, can be illustrated and examined through many of Elvery’s works. In addition to the female, Elvery’s portrayal of male adolescence depicts a unique interpretation of Christ intertwined with the national image. When examined comparatively, Elvery’s paintings, sculptures, illustrations, and stained glass in connection with Irish Nationalism alongside various negative images of Irish-Catholics during the fight for Home Rule show the complexities and contradictions of national identity. Elvery’s experience as a mother, a woman, an activist, and an artist both affected and was affected by Ireland’s own shifting identity. Elvery’s representation of the world around her and her reaction to her environment work together to form a concrete study of Ireland’s efforts toward independence. This is especially significant because Elvery resided in both England and Ireland throughout the first half of the twentieth century and viewed the conflict over Home Rule from both sides. The perspective of one middle-class individual acts as a broad reflection of the Irish middle-class experience. Furthermore, utilizing the visual arts as historical documents adds to the deeper understanding of historical inquiry. Through the visual arts, historians can gain insight into the daily lives of the people who shaped the past, how those people expressed their anxieties, and how the arts worked as a subtle vehicle for change during tumultuous times. For example, Auguste Rodin’s Burghers of Calais exemplifies France’s national pride after centuries of struggle with the rest of Europe; Frida Kahlo’s various works symbolized the Mexican people’s frustrations with American capitalism, big industry, and global imperialism. In kind, Beatrice Elvery’s work illustrates Ireland’s desire for independence from Great Britain, not just politically but economically, culturally, and socially.