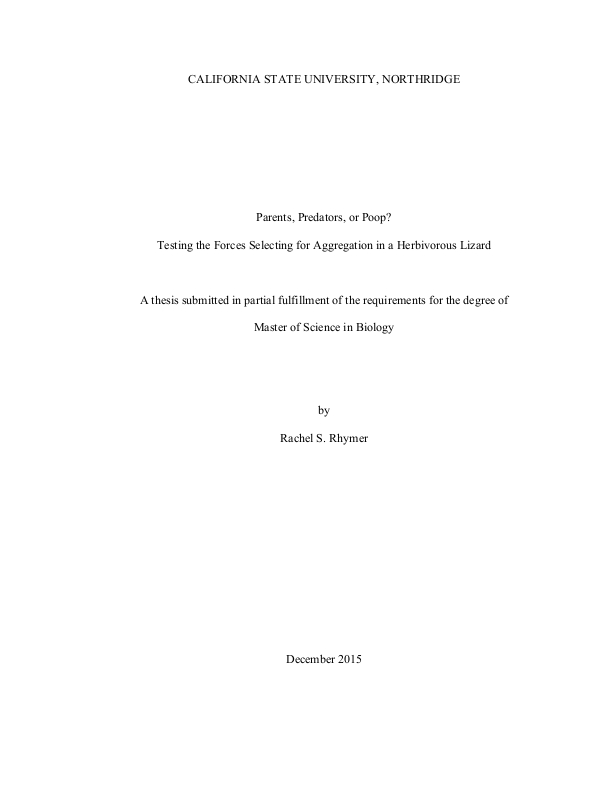 Parents, Predators, or Poop? Testing the Forces Selecting for Aggregation in a Herbivorous Lizard

Although physiological, antipredatory, and reproductive benefits have been predicted as important drivers of grouping behaviors in animals, the initial forces selecting for aggregating behavior can be difficult to identify. Grouping often evolves in populations with high densities that occur in challenging environments-conditions that can foster intraspecific interactions and may lead to the evolution of increasingly complex social behaviors, including the formation of kin groups or parental care. Phymaturus extrilidus is a herbivorous and viviparous iguanian lizard that occurs in high densities on rock outcrops in the high-elevation desert (Puna) of San Juan Province, Argentina. This species has been reported to form stable aggregations between adult females and neonates soon after birth, suggestive of maternal care. Parental care is considered rare in squamate reptiles and there have been few tests of the potential benefits or forces selecting for this derived form of grouping behavior. Our goals were to (1) test whether the females associating with neonates were their mothers, and (2) identify the likely evolutionary pressures selecting for aggregating behavior in this species. Such pressures likely include reducing predation risk and/or the need to socialize to transfer vital gut microsymbionts for digesting plant tissues from one generation to the next. I hypothesized that (1) grouping lizards would be commonly observed in the population, (2) groups would be primarily comprised of mothers and their neonates, (3) groups would react more quickly to the threat of predation, and (4) that neonates would acquire and therefore possess microbial communities that are most similar to those of their mothers. I assessed stable grouping rates via focal animal observations over two field seasons (November 2013 and 2014), and although relatively infrequent, groups were nearly always comprised of neonates and adult females. Next, I determined relatedness among 173 individuals via kinship analyses of 10 variable microsatellite loci. Our genetic analyses revealed that only one of 15 stable groups was comprised of related individuals, which did not support our hypothesis that neonates aggregate primarily with their mothers. To assess the role of predation pressure in selecting for grouping behaviors, I conducted predator-approach experiments using models of two confirmed predators (a fox and a hawk). Lizards in groups did not differ from solitary lizards in their responses to predators, rejecting this hypothesis as a potential benefit of grouping. To test whether grouping lizards benefited from exchanging intestinal microbes (Archaea and Bacteria), including taxa presumably required for digesting plant fiber, I characterized these communities by sequencing the 16S rRNA subunit of microbes from lizard fecal samples on the Ilumina MiSeq platform. Using standard workflows (QIIME) I compared these communities among lizard age classes using ANOSIM and PERMANOVA and discovered that lizard spatial organization, not relatedness, was the best predictor of hindgut microbial community composition. When only including a small subset of newborn lizards and their genetic mothers, however, I saw evidence that they are initially acquiring their gut microbes from their mother, but quickly diverge from this primary microbial signature. This finding suggests that lizard acquire their microbial communities over time from common localized source(s) (soil, water, or feces), or that access to resources, such as preferred basking sites, may facilitate the exchange of microbes. Social species exhibit a wide continuum of behaviors, ranging from short-term seasonal interactions to lifelong and complex bonds with mates or kin. I suggest that P. extrilidus has taken the first evolutionary steps along this sociality continuum and, assuming sufficient selective pressure, would be well suited for future studies that seek to understand how more complex social behaviors evolve. More studies are needed on other liolaemids that reportedly exhibit similar grouping behaviors to test whether our findings are generalizable for this clade and to elucidate the broader phylogenetic and ecological diversity of these social interactions among squamate reptiles generally.