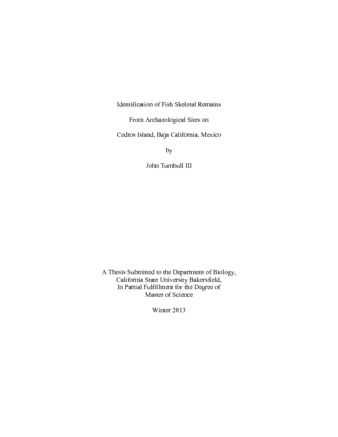 Examination of fish skeletal remains from archaeological sites serves both archaeological and biological interests. For archaeologists, it can establish the role of fish consumption in a people’s diet, provide clues to their fishing technology and overall maritime capability, and even suggest movement patterns and settlement (Rick et al. 2001, Erlandson et al. 2008, Des Lauriers 2010). Analysis of fish bones from excavations on San Miguel Island, of the southern California coast, suggested use of boats and early evidence of hook-and-line fishing techniques, concurrent with an estimate that fish comprised over 50% of the edible meat for the early islanders (Rick et al. 2001). Fishbone identifications have contributed to determining where early Paleocoastal peoples settled, to indicating occupation in some areas earlier than previously thought, and to suggesting that at least some southward Pacific coastal migration in North American may have been by sea (Erlandson et al. 2008). For ichthyologists, identifications of fish remains provide a historical or prehistorical survey of fishes in an area, and with comparison to modern surveys of those same areas, provide bases for examining fish distribution, fish diversity, and marine habitats over time (Gobalet 2000, Salls 2000, Erlandson et al. 2008). In supporting Point Conception, California, as a landmark for a marine faunal break, Gobalet (2000) compared the distribution of fishes identified from the archaeological record to their current distributions. Salls (2000) used bone identifications from archaeological sites on Southern California’s San Clemente Island to describe probable offshore habitats for as early as 9,000 calendar years before the present (cal BP). For over a decade, archaeological excavations on Cedros Island, which lies off the Pacific coast of the Baja California peninsula, have unearthed evidence of early colonization in the Cedros area, with implications for Paleo-human migrations (Des Lauriers 2010). Unfortunately, no on-site scientific survey of the fishes or marine habitats at Cedros Island has been published against which to compare fishbone analysis, but modern surveys of the waters close to Cedros Island exist and can be useful. Regarding habitats, Quast (1968), Engle (1993), and Bond et al. (1999) represent influential earlier studies that established the use of fish species associated with specific habitats. More recent marine faunal surveys that included the Cedros marine environment (but not specifically Cedros Island) also describe fish assemblages associated with habitats. Stephens et al. (2006) examined such associations for the rocky reef/kelp bed habitats of the southern San Diego Province, as did Pondella II et al. (2005) for the San Benito islands that lie close to Cedros. Allen and Pondella II (2006) provided a comprehensive ecological review of the California coast south to central Baja and identified fish species associations with a wide range of habitats. In this thesis, I report the identifications of fish bones from archaeological excavation sites on Cedros Island. The archaeological investigation indicates the settlement of the area about 12,000 cal BP and the establishment of a society that existed into the 18th century of our current era (CE; Des Lauriers 2005, 2008, 2010). These identifications then are provided to assist this investigation on Cedros in its efforts to better understand the Cedros islanders and to lend some insight as to the types of fishes they harvested and the predominant habitats those fishes represented.