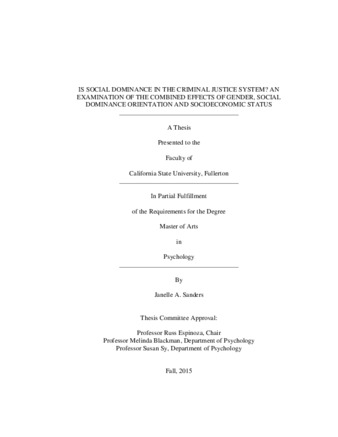 The majority of Americans endorse egalitarian views, however our society is still plagued by prejudice and discrimination. (Dovidio & Gaertner, 2000). Unfortunately, great disparities exist in the treatment of individuals based on race/ethnicity, gender, and socioeconomic status (SES) (Dovidio & Gaertner, 2000). It appears discrimination has become more subtle over the past forty years; however, it can still have dire consequences for minority groups (Pearson, Dovidion & Gaertner, 2009). Though research has examined this understated form of discrimination in the legal system from various theoretical perspectives, little research has focused on Social Dominance Theory (Pratto & Sidanius, 1994) for biases in juror decision making. SDT describes how social divisions are created in order to maintain or increase hierarchical separation of groups (Pratto et al., 1994). A key component to SDT is an individual’s personal Social Dominance Orientation (SDO; Pratto et al., 1994). SDO refers to the degree in which an individual values social groups arranged hierarchically (Pratto et al., 1994). Applied to the legal system, jurors who endorse hierarchical arrangements of groups are more likely to be punitive toward perceived subordinate groups (e.g., minorities and the poor). In addition, juror demographic characteristics, such as gender and SES, have been shown to influence juror decisions. Specifically, juror gender and SES often combine to contribute to biases toward a defendant. The purpose of this thesis is to examine how Social Dominance Theory can explain the interaction of juror SDO, juror gender, and juror SES to explain juror biases in decision making. Archival data, collected from 375 undergraduates at California State University, Fullerton, will be used to examine the hypotheses that female jurors, with high SES and SDO, will find the defendant guilty more often, recommended harsher sentences, find the defendant to be more culpable of the crime, and rate the defendant more negatively on a variety of trait ratings. Results demonstrated a nonsignificant relationship between juror gender, SDO, SES and verdict outcomes; the majority of participants found the defendant to be guilty of the crime. Similarly, juror gender, SDO, and SES did not significantly relate to sentence length, however a trend showed that female jurors, of high SDO and SES, were among the participants more likely to recommend a life sentence to the defendant. As predicted there was a significant three-way interaction between the independent variables and culpability measures; however, the direction of results only partially supported the hypothesis. Lastly, the fourth hypothesis was fully supported in that female jurors, high in social dominance and socioeconomic status rated the defendant more negatively on a number of trait ratings. Several findings in the current study were surprising and additional research is needed to further understand the ways in which SDO interacts with genders and SES to influence juror decision-making. Future studies would benefit from taking into account whether or not the juror is a parents, as well as some demographic factors of the defendant.