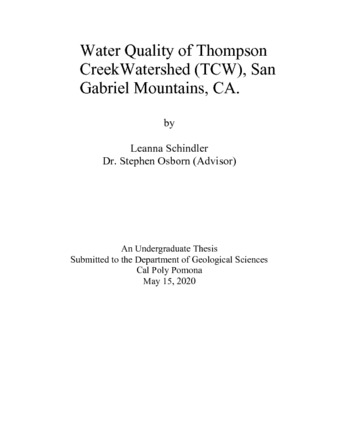 Between the Angeles National Forest and the San Gabriel Mountains, the area of field investigation, Thompson Creek Watershed (TCW), is found cutting through Cobal Canyon in Claremont, California. TCW is located about 12 miles north east from Cal Poly Pomona and about 50 miles east from the Pacific Ocean. The water that flows through TCW ultimately ends in the Thompson Creek Dam, which received 27.43 inches of rain from October 2018 to August 2019. The water is stored in the Thompson Creek Dam before it percolates and recharges the Canyon Basin. Canyon Basin is a part of a larger aquifer, the Six Basins Aquifer, and the Six Basins Aquifer is responsible for providing drinking water to the local surrounding cities such as Claremont, La Verne, Pomona, Upland, and other surrounding cities (Brethorst, Nicholas). Alongside TCW is a popular 5-mile hiking trail, known as “The Loop,” in the Claremont Hills Wilderness Park. This area is known of by locals and travelers alike due to its quick escape from the suburban areas. This trail has become an area of recreation and a meeting point for families, friends, including pets. While there is heavy foot traffic, it is not uncommon to see wildlife along the watershed; deer, snakes, rabbits, squirrels, and coyotes are a few examples that can be seen there on any given day. Despite this water being consumed by local communities, being a part of a recreational area, and being habitat for wildlife, there is little available public information on the quality of this water.