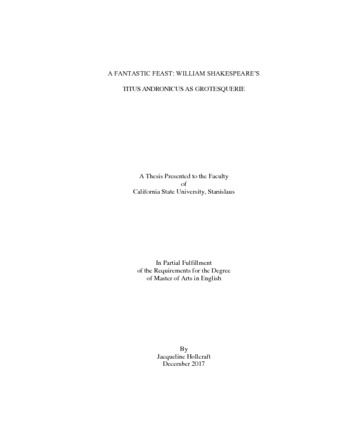 Criticism on Titus Andronicus neglects a comprehensive discussion on the play’s grotesque characteristics; likewise, grotesque theorists fail to mention Titus Andronicus when they discuss Shakespearean grotesque. However, Titus Andronicus offers ample images and figures that exemplify the grotesque concepts of hybridity, the comic macabre, the fantastic, the bizarre, and the monstrous, which can be found not only in the script, but also in the play’s source material, Ovid’s Metamorphoses. Ovid significantly influenced the flourishing of the grotesque aesthetic in the Renaissance, as he was extensively read by Nero, whose excavated Domus Aurea contained the “grotto art,” or grottesche, that inspired the grotesque aesthetic. Titus Andronicus particularly exemplifies Mikhail Bakhtin’s detailed exposition on Renaissance grotesque and the carnivalesque, especially the grotesque’s emphasis on feasting, Saturnalias, carnival hell, bodily material, negation, and degradation. Furthermore, the performance history of Titus Andronicus displays an inherent understanding of the play as a grotesque through either a faithful adherence to Shakespeare’s original script and all its grotesque elements or by an avoidance of the grotesque in order to appease the social and artistic sensibilities of particular audiences. The significant performances of Titus Andronicus in the past century reveal that contemporary directors and audiences are now willing to confront and contend with the disruption, shock, disgust, uncomfortable laughter, and wonder that accompanies the grotesque. Special attention is given to productions by Peter Brook, Deborah Warner, Julie Taymor, and Lucy Bailey.