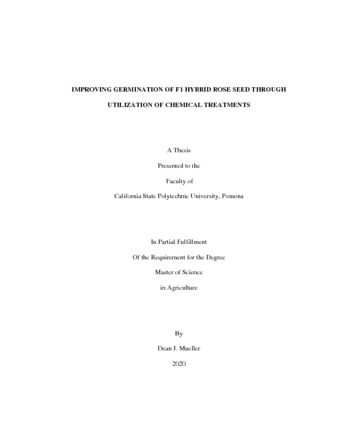 Roses are one of the most commonly used landscape plants planted in the United States, but seed dormancy of F1 hybrids have made developing new varieties difficult. The purpose of this research was to produce study-based information that would aid in the planning and decision-making process of a well-designed breeding program, increase the germination percent of select rose seeds, and increase the knowledge of the contributions different rose varieties have on seed germination characteristics. The research was performed at Agriscapes Greenhouses, at California Polytechnic University, in Pomona, California. For this study, a total of eighty-one rose bushes were used. Of the eighty-one, fifty-six were used to produce seeds, and twenty-five rose bushes were selected for pollen production. To obtain the research goals, the study was broken into two sections. For study 1, germination percent, seed length, seed width, and seed thickness were measured. All measurement values were compared to each other, and correlations between the values were determined. For study 2, rose F1 hybrid seed was treated with sulphuric acid, gibberellic acid, and hot water to determine if specific treatments increased germination percent. Both studies helped determine the role of physiological and mechanical dormancy on germination of F1 hybrid rose seed, determine the maternal influence on seed coat dormancy, and finally, to determine if chemicals are an economically viable and effective method for overcoming F1 hybrid seed dormancy. In study 1, data show that germination percent is basically not correlated to seed thickness as it was thought. For study 2, it was found that plant cross and seed treatment were significant to germination percent. However, seed treatments caused a negative effect on seed germination. Seed dormancy is found to be heavily influenced by the maternal lines.