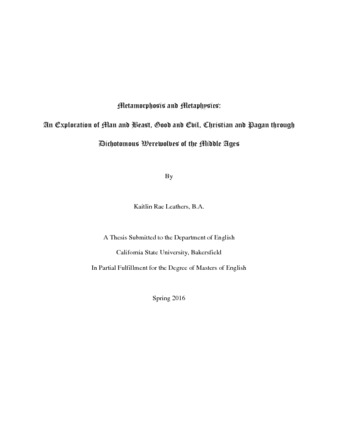 Metamorphosis and metaphysics: an exploration of man and beast, good and evil, Christian and Pagan through Dichotomous Werewolves of the Middle Ages

In this thesis, I explore philosophical influences underlying various portrayals of werewolves in language, religious texts, law, and myth, discussing depictions from the earliest in antiquity—the first in The Epic of Gilgamesh in ancient Mesopotamia—through the end of the Middle Ages, paying particular attention to uniquely Christian werewolves who emerges in what Caroline Walker Bynum coined as the “werewolf renaissance of the twelfth century” (94). It is necessary to first establish an understanding of the werewolf as he appears in orthodox Christian thought of the Middle Ages. To accomplish this, in the first chapter, “Wolves, Werewolves, and the Devil,” I divulge the earliest appearances and usages of the word werewolf in the English language, provide etymological context, and offer definitions of the medieval werewolf and his practices. This initial chapter is primarily devoted to discussion of early medieval portrayals of wolves and werewolves in Scripture and other religious writings, which establish the predominant medieval Christian view of the werewolf as an agent of evil, a bondslave of the Devil. In the second chapter, “Of Men and Beasts,” I explore the origins of medieval perceptions of humanity and animality in the philosophies of Classical antiquity, focusing particularly on Stoic principles which seem to have been most influential to philosophers and theologians of the Middle Ages. In the third chapter, “Of Men and Wolves,” I discuss man’s relationship with wolves in nature and the various ways in which the two were merged together to create images of werewolves. This chapter provides insight to the Germanic custom of labeling outlaws as wolves or werewolves, and it also fosters understanding of the ancient Teutonic traditions in which men ritualistically transformed themselves into wolves—a custom that very likely contributed to Christian prejudices against pagans and to medieval representations of werewolves as evil entities. In the final chapter, “Christianized Werewolves of the Twelfth Century,” I offer analysis of sympathetic werewolves and juxtapose these to pagan werewolves discussed in the previous chapter. By the end of this thesis, it is my hope that the reader departs with a fuller knowledge of the origins of werewolves in Western thought, the multitude of meanings they have acquired throughout their development, and the ontological fears they embody: the fear that man is not unique to the animals around him—that the beast is not what he becomes, but what he has always been.