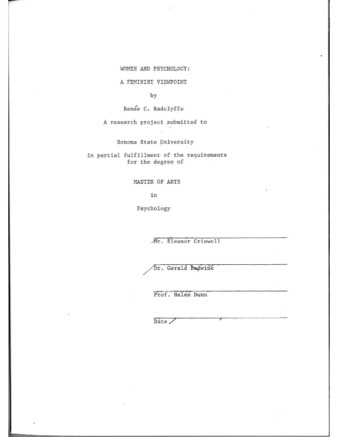 Women and Psychology: A Feminist Viewpoint

Purpose of the Study: This study is an attempt to validate the importance of integrating women's issues into traditional psychology classes at a college level. Psychology, for the most part, had ignored, trivialized, and/or negated women's life experiences. All too often women are viewed as mentally unhealthy or incapable of maturing fully because of the standards set by society and by those in the psychological profession. Because of such stereotypical sex-role attitudes, it is most important to examine why such attitudes exist and to examine their origins. Procedure: I have researched two areas of female psychology: first, Freudian and feminist psychology, and second, looking at women psychologists whose contributions to the development of modern psychology have been deleted from current psychology textbooks. In part one, using literature primarily from feminist books, I chose to explore several of Sigmund Freud's concepts on female sexuality: penis envy, masochism, vaginal versus clitorial orgasm because such concepts appear to be, in part, correlated with the oppression of women. I have also commented on other Freudian theorists, and others who "broke away" from Freud's circle. In part two, I have reviewed psychology textbooks to confirm the absence of women and their contributions and have researched other feminist books to find the history of women psychologists. Findings and Conclusions: With the development of modern psychology, an attitude surfaced that still exists today, and that is that mentally healthy women are those who adhere to sex-role expectations in our society. Freud, for example, once described feminists as women who had a desire to be men. I have often heard men comment that feminists are trying to be like men or that they are dykes or castrating bitches. Because of feminist therapy, many women are challenging such attitudes by learning to understand social conditioning rather than by internalizing such conditioning that has made women feel inferior and mentally unhealthy. As students of psychology, men and women have been taught that women have not been influential in the development of modern psychology. Current textbooks in the history of psychology ignore or trivialize women's contributions. Through extensive and exhausting research, I was able to find information about many women psychologists who have now been deleted from textbooks. The integration of such information is vital to the education of today's students. While women's studies classes have attempted to fill this void, many male students and instructors believe such classes are not pertinent. this research project argues that, until textbooks are revised to include the female half of psychology, it is essential that instructors take the time to find material on women psychologists and on more positive images of female psychology and incorporate it into their lectures and reading materials.