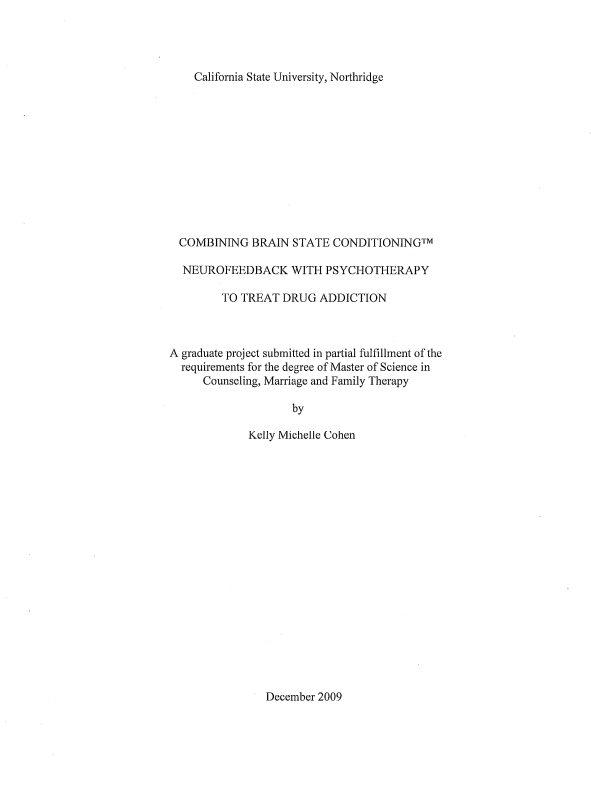 Drug addiction is a complex yet treatable brain disease characterized by compulsive drug cravings and seeking that persists even after severe adverse consequences. For millions of individuals in the United States, drug addiction becomes chronic, with relapses possible even after long periods of abstinence. In 2002, it was estimated by the Marin Institute that 22 million Americans had a substance abuse or dependence disorder. Furthermore, substance abuse includes a mixing of substances/drugs and comorbid conditions are common and can vary by individual. According to Sokhadze, Cannon, and Trudeau (2008), drug addiction can be described as a mental disorder with behavioral, cognitive, and psychosocial features, characterized by physiological dependence accompanied by the withdrawal syndrome on discontinuance of the drug use, psychological dependence with craving, the pathological motivational state that leads to the active drug-seeking behavior, and tolerance, expressed in the escalation of the dose needed to achieve a desired euphoric state. Treatment of addiction may require repeated treatments to increase the intervals between relapses and reduce their intensity, until abstinence is achieved (NIDA, 2006). While major resources have been employed to study and treat addiction, Scott et al. (2005) indicate that there has been little improvement in the success rate of treatment, with the rates of relapse remaining high, with over 70% of those who have attempted to recover relapsing. It is therefore apparent that even with the recent focus on treatment, many are unable to fully recover from their addictions. The purpose of this research is to gain insight on Brain State Conditioning� neurofeedback that differs from other neurofeedback providers and examine the effectiveness of incorporating neurotherapy with psychotherapy to treat drug addictions. Lee Gerdes, CEO of Brain State Technologies� and developer of Brain State Conditioning� (BSC) created an inventory of protocols that exercise the brain particularly with its own needs and values, causing real learning in the brain with the belief that every brain, like every person, is unique. BSC uses different methods than other modalities and neurofeedback providers in that it incorporates a holistic, medical, and psychological method (NeuroMagic Brain Wave Training, 2008). In order to better understand the addictive brain, treatments, neurofeedback and Brain State Conditioning� in particular, it is important to understand the addicted brain, therapeutic support provided with neurofeedback, and the implications of future clinicians wanting to incorporate this resource in their practices.