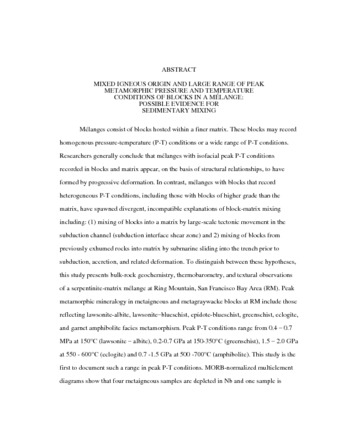 Mixed igneous origin and large range of peak metamorphic pressure and temperature conditions of blocks in a mélange: Possible evidence for sedimentary mixing

Mélanges consist of blocks hosted within a finer matrix. These blocks may record homogenous pressure-temperature (P-T) conditions or a wide range of P-T conditions. Researchers generally conclude that mélanges with isofacial peak P-T conditions recorded in blocks and matrix appear, on the basis of structural relationships, to have formed by progressive deformation. In contrast, mélanges with blocks that record heterogeneous P-T conditions, including those with blocks of higher grade than the matrix, have spawned divergent, incompatible explanations of block-matrix mixing including: (1) mixing of blocks into a matrix by large-scale tectonic movement in the subduction channel (subduction interface shear zone) and 2) mixing of blocks from previously exhumed rocks into matrix by submarine sliding into the trench prior to subduction, accretion, and related deformation. To distinguish between these hypotheses, this study presents bulk-rock geochemistry, thermobarometry, and textural observations of a serpentinite-matrix mélange at Ring Mountain, San Francisco Bay Area (RM). Peak metamorphic mineralogy in metaigneous and metagraywacke blocks at RM include those reflecting lawsonite-albite, lawsonite–blueschist, epidote-blueschist, greenschist, eclogite, and garnet amphibolite facies metamorphism. Peak P-T conditions range from 0.4 – 0.7 MPa at 150°C (lawsonite – albite), 0.2-0.7 GPa at 150-350°C (greenschist), 1.5 – 2.0 GPa at 550 - 600°C (eclogite) and 0.7 -1.5 GPa at 500 -700°C (amphibolite). This study is the first to document such a range in peak P-T conditions. MORB-normalized multielement diagrams show that four metaigneous samples are depleted in Nb and one sample is enriched in Ba and Pb. These patterns as well as tectonic discrimination diagrams (e.g. La/Yb-Nb/La, Ti-V, Ti-Zr-Y) suggest that two samples have MORB-like protoliths and two samples have arc-like protoliths. Whereas, different researchers have asserted that varied peak P-T conditions in mélanges reflect sedimentary or tectonic mixing, the presence of metavolcanic rocks of arc origin is difficult to reconcile with tectonic incorporation from the subduction zone hanging wall, but compatible with submarine landslide transport to the trench from the upper plate.