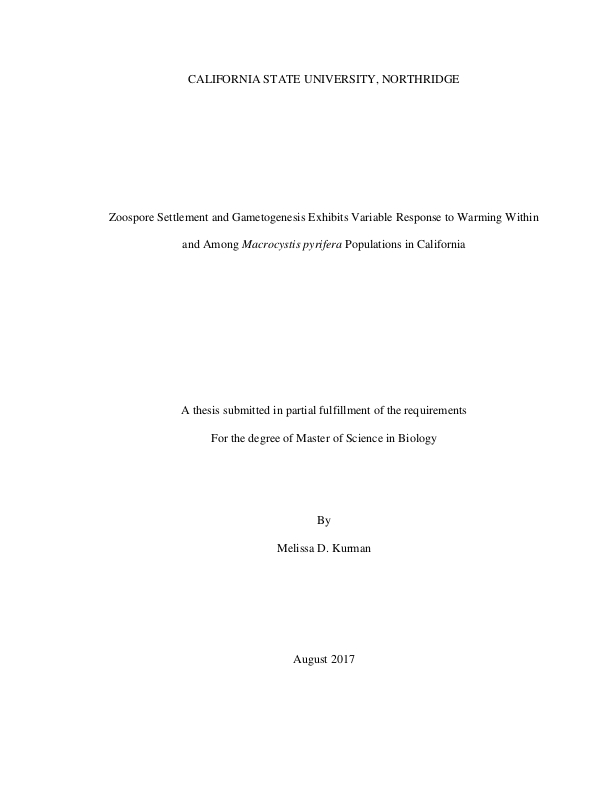 Foundation species create structure in a community, and understanding their ecological and evolutionary response to global change is of utmost importance to ecological and economic management of these species and the communities that rely on them. Macrocystis pyrifera, giant kelp, is a foundation species in North America, South America, Africa and Australia (Foster & Schiel, 1985). Giant kelp supports a diverse ecosystem that contributes to recreational fisheries, tourism, and industry. M. pyrifera abundance fluctuates regularly, and generally decreases in low-nutrient, high-temperature, and stormy conditions (Schiel & Foster, 2015; Tegner & Dayton, 1987). This project aims to determine if individuals and/or geographic sites of M. pyrifera exhibit variable zoospore settlement and gametogenesis in warming waters. If heat-tolerant individuals are present, such variation could be the mechanism that drives population persistence in a changing climate. To test this response, I collected fertile M. pyrifera sporophyll blades from three sites along the California coast (Los Angeles, Santa Barbara, Monterey Bay) and induced zoospore release in the lab. Spores settled on microscope slides at three treatment temperatures (16, 20, 22 ºC) and matured for 21 days. I imaged slides weekly using a camera attached to a microscope to determine settlement, survival, and maturation rates. Both spore settlement and gametophyte maturation varied within and among sites in response to temperature, while survival varied only among sites. Spores from Los Angeles experienced decreased settlement but increased survival with warming temperatures, with nearly zero maturation at the highest temperature. Spores from Santa Barbara had the highest settlement but lowest survival at all temperatures, and no maturation success above 16 ºC. Spores from Monterey exhibited a contrasting pattern to those from Santa Barbara with the lowest settlement at all temperatures, but the highest survival (except for at 22 ºC) and maturation success. Variance components suggest that variation in settlement was explained primarily by on the individual-level, and that variation in survival was nearly equally explained by factors involving site. Variation in maturation, however, was explained on both the individual- and site-level. These results suggest that evolution in settlement-related traits may occur within sites, but evolution of traits that affect success of gametophyte survival and maturation is more likely to occur over a regional scale. Standing variation in California M. pyrifera populations may allow for increased resilience through allelic diversity as the oceans continue to warm.