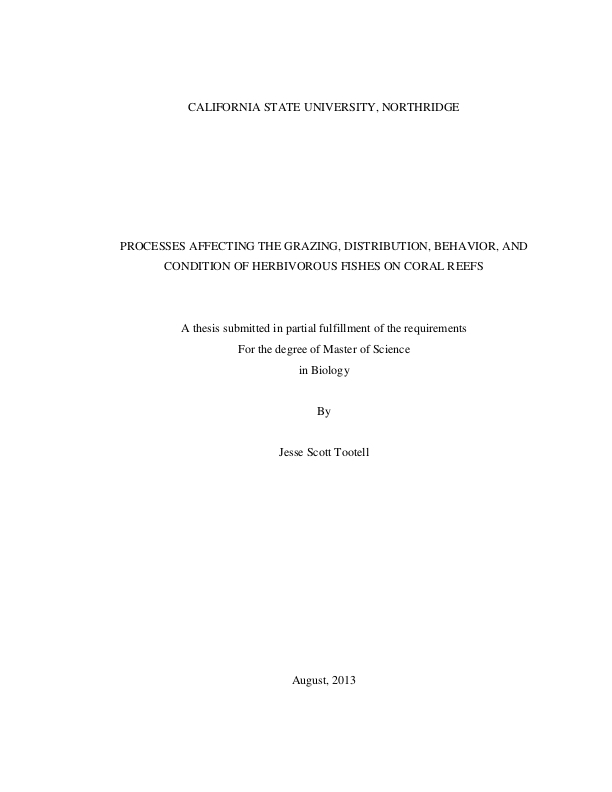 Herbivory is a critical process in coral reef systems, which are among the most functionally diverse and productive ecosystems on earth. As coral reefs progressively endure both increasing frequencies and intensities of anthropogenic and natural disturbances, herbivory is arguably more important now than ever. The most critical events in terms of coral reef function are those that result in drastic loss of coral cover, which in turn can lead to phase shift in the benthic community from coral to macroalgal dominance. Herbivores can remove algae, facilitate coral recruitment, and ultimately contribute to the recovery of coral systems. Consequently, a priority of research concerning herbivore-mediated resilience and recovery of coral reefs is to understand the processes that influence herbivory, especially on compromised coral reefs where herbivory may be most important. This research may include herbivore responses to disturbance and benthic shifts, positive feedbacks between herbivores and the environment, and processes or interactions that can reduce herbivory. However, many of these topics are not well understood. To address the relative lack of studies concerning these subjects, this study focused on several aspects of the relationships between herbivorous fishes, reef structure, and algal resources on Moorea, French Polynesia (where all research for this study was performed). The first part of this study evaluated the effects of algal resources on the distribution, behavior and condition of herbivorous fishes among six sites with varied algal resource availability in the back reef environment of Moorea. Here the hypotheses that increased algal resource availability would result in 1) increased biomass of herbivorous fishes, 2) altered behavior (e.g. decreased movement), and 3) increased energy reserves (i.e., lipids) were tested. These were specifically examined using field surveys and algal production estimates, behavioral observations, and collections of adults among all sites respectively. We found that the best predictor of herbivorous fish biomass was algal turf production, where fish biomass increased with increasing algal production. Behavioral observations of the herbivorous parrotfish Chlorurus sordidus (Scaridae) revealed that area traveled increased as algal turf cover decreased. Additionally, the Hepatosomatic Index (HSI) - a proxy for determining excess energy reserves stored as lipids in the liver - showed that energy stores (HSI) were a positive function of algal turf production, and a negative function of herbivorous fish density. The second part of this study addressed the relationship between foraging of herbivorous fishes and structural microhabitats of the back reef habitat. Specifically, it tested three hypotheses, that 1) total foraging intensity would differ among microhabitat types, 2) this pattern would be consistent among sites at larger scales (3-8 km), and 3) differences among microhabitats would be driven by physical structure and not differences in algal turf communities. Foraging was assessed using timed observations of bite rates on algal-turf covered substrata. Foraging rate was compared among five microhabitat types in an observational study; and then differences among microhabitats were evaluated more rigorously with a turf transplant experiment that crossed microhabitat source of turf with microhabitat destination. Vermetid mucous nets were removed to test their effect on foraging. Foraging intensity (bites m-2 min-1) and size-weighted foraging (bites*TL2 m-2 min-1) differed among five microhabitats (high, mid, and low bommies, pavement, and rubble) ranging from ~3-12 bites min-1, suggesting that fishes preferred to graze in certain areas. Algal transplants corroborated preferential grazing, showing similar patterns despite altered origin of turf. In the third and final portion of this study, I examined how foraging of herbivorous fishes around could be altered by negative indirect effects of a vermetid gastropod (Dendropoma maximum). These sessile gastropods extrude a mucous net that is used to indiscriminately collect plankton and settles on the surrounding substrata. Vermetid mucous nets can have deleterious effects on corals, including reductions in the growth and survival of some coral species. To address these potential effects on herbivorous fish grazing, both observational and experimental studies were used. Foraging rates from observations in the previous section of this study were used, with the additional variable of vermetid mucous net coverage as a covariate. Foraging rates were compared among the three microhabitat types commonly inhabited by D. maximum (high, mid, and low bommies). Vermetid mucous nets were also removed in a separate experiment to test their effect on foraging. Foraging rates declined with increasing cover of vermetid mucous nets, ranging from ~2-22 bites m-2 min-1 at 0% coverage to 0-5 bites m-2 min-1 at 100% coverage, but the magnitude of this effect varied among microhabitats. Experimental removal of vermetid mucous nets increased foraging intensity by ~220% relative to when vermetid nets were present. On the whole, the evidence collected from these studies supports the hypothesis that herbivores generate resilience in coral systems, in that herbivores appear to be tightly linked to algal resources in this system. Moreover, the positive relationship between herbivorous fish biomass and algal turf production suggests bottom-up control of herbivores on Moorea. Results from this study support the hypothesis that fundamental changes can occur within populations of herbivorous fishes following shifts in benthic composition that allow them to contribute to coral recovery. Results also elucidated fine scale heterogeneous patterns in herbivory and the production of algae, which could have important implications not only for planning future studies, but also potentially for the resilience of coral reefs.