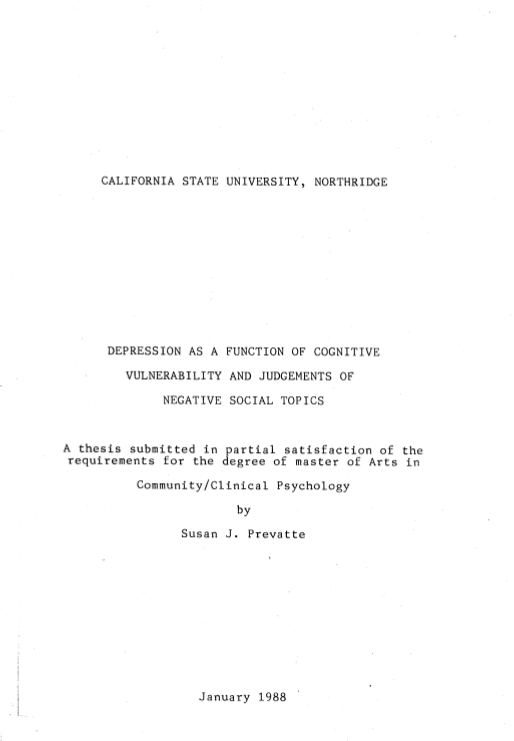 A group of currently non-depressed college students (as assessed by the Beck Depression Inventory, BDI) who are vulnerable to depression, were given the Topic Appropriateness Scale (TA) and the BDI on two separate occasions to elicit both their willingness to discuss personal problems and their depression level. The results showed that there was no linear relationship between level of depression and willingness to discuss negative topics. Explanations for this lack of direct association were explored. In support of previous findings, subjects who were vulnerable (high on the Dysfunctional Attitude Scale, DAS) rated negative topics as appropriate for discussion. In addition, the results supported the contention that vulnerable individuals may become depressed over time. This information may imply that cognitive therapy may be effective in treating depression. Depression is described in the DSM III (1980) as a dysphoric mood or loss of interest or pleasure in all or almost all usual activities and pastimes. The dysphoric mood is characterized by symptoms such as: depressed, sad, blue, hopeless, low, down in the dumps, and irritable. The disturbance is prominent, relatively persistent and associated with other symptoms including appetite disturbance, weight change, sleep disturbance, psychomotor agitation or retardation, energy decrease, feelings of worthlessness or guilt, difficulty concentrating or thinking, and thoughts of death, suicide, or suicidal attempts. Depression has been studied from several perspectives. The most influential and enduring theory of depression was developed by Freud (1917). His psychoanalytic view of depression emphasizes unconscious conflict associated with object or ego loss. Freud saw the potential for depression in childhood experience. He theorized that during the oral period the child's needs may be insufficiently or oversufficiently gratified. The person would remain "stuck" at this developmental stage and dependent on the instinctual gratification particular to it. Fixation at the oral stage results in a tendency to be excessively dependent on other people for the maintenance of self-esteem. Freud (1917) hypothesized that after the loss of a loved one through death, or in an ideal sense symbolically lost as an object of love, the mourner incorporates or introjects this lost person and identifies with him or her. Freud asserted we unconsciously have negative feelings against those we love, and that the mourner now becomes the object of his own hate and anger. The mourner also resents being deserted and feels guilt for real or imagined sins against the lost person. The mourner works through these feelings by recalling memories of the lost one and separating himself from the one who has died and loosening the bonds that introjection has imposed. According to Freudian theory, overly dependent individuals are unable to work through their grief and it develops into an ongoing process of self-abuse, self-blame and depression. Overly dependent individuals do not loosen their emotional bonds with the lost loved one and continue to blame themselves for faults and shortcomings perceived in the loved one who has been introjected. This anger turned inward is the basis for the psychodynamic view of depression. (See more in text)