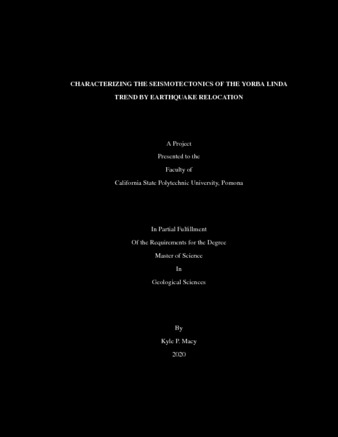 Characterizing the Seismotectonics of the Yorba Linda Trend by Earthquake Relocation

The Yorba Linda Trend is a proposed NE-SW alignment of earthquakes near the western edge of the Los Angeles Basin in southern California first described by Egill Hauksson in the early 1990s (Hauksson, 1990). Most earthquakes in this area exhibit a strike-slip mechanism, but they do not fall on or near any mapped fault traces. More recent events and earthquake sequences have occurred within the boundaries of the Yorba Linda Trend since its conception: the 2002 Yorba Linda and 2008 Chino Hills earthquakes. These two sequences may now be considered part of this trend. Both of these sequences have a northeast-southwest striking orientation. The 2014 La Habra earthquake sequence located nearby follows a parallel orientation. The largest events of each of these sequences all exhibit a strike slip or oblique mechanism. The aftershock sequences, combined with the mechanisms, suggest previously unmapped left-lateral strike-slip faults may be responsible, but their exact geometry is unclear. Bookshelf faulting within the Chino Hills, potentially produced by the tectonic movement of the Whittier Fault and the Chino Fault may provide an explanation to the origin of some of these earthquakes. Because a majority of these earthquakes are small, they are poorly located. Seismic relocation using waveform cross-correlation allows for these small events to be relocated with a relatively high accuracy and for possible fault structures to be revealed. In this study, we utilized the GISMO cross correlation MATLAB toolbox (Thompson & Reyes, 2018) to determine correlation values and lag times of similar earthquakes in order to improve the arrival time measurements of the P- and S-waves of these earthquakes. We then entered these improved arrival times in the GrowClust relative relocation algorithm (Trugman & Shearer, 2017). In this relocation procedure, we used three 1-D velocity models: the IASP91 velocity model (Kennett & Engdahl, 1991), the smoothed southern California velocity model (Shao et al., 2012), and the Los Angeles Basin velocity model determined from the 1987 Whittier Narrows Earthquake (Hauksson et al., 2008) under a 0.2 sec RMS differential travel time residual, as well as a 0.6 sec differential travel time residual to successfully relocate earthquakes in the region of the YLT from 1989 to 2018. Each of the results for the six relocation attempts reveals two distinct clusters of earthquakes that are relatively planar centered around the 2008 Chino Hills Earthquake and the 2002 Yorba Linda Earthquakes. A noticeable gap is present between these two sequences. Relocation of the 2014 La Habra Sequence has aligned these earthquakes to form a northwest dipping planar structure, with many events clustered around the Coyote Hills Fault System. Other clusters of seismicity that were revealed by the GrowClust relocation show a system of earthquakes within the Los Angeles Basin just north of the Peralta Hills and El Modeno Faults, which may be anthropogenically induced by oil extraction within the Richfield Oil Field. None of the relocation results show a clear through-going planar structure connecting the Yorba Linda and Chino Hills Sequences. In addition, we do not see any seismicity trends that imply the presence of bookshelf faulting that connect the two sequences. The Yorba Linda Sequence may be situated along a high angle fault structure to the Whittier Fault. The orientation of this fault structure in combination with the focal mechanisms is indicative of a left-lateral strike slip fault. The Chino Hills Sequence is situated along a similarly oriented fault. Relocations of the La Habra Sequence consistently reveal that these events are oriented along a northeast-southwest striking fault, beginning at the Whittier Fault and extending towards the Coyote Hills Fault System. This orientation, in combination with the focal mechanisms of this sequence, would imply the existence of a steeply dipping or near vertical left-lateral strike-slip fault.