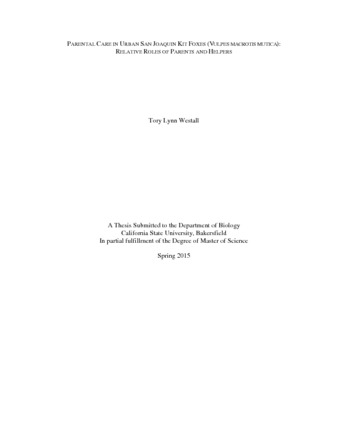 The San Joaquin kit fox (Vulpes macrotis mutica) is an endangered species endemic to the San Joaquin Desert in the Central Valley of California. Much of the habitat in the San Joaquin Desert has been converted for agricultural, industrial, and urban development. The remaining San Joaquin kit foxes exist as a meta-population in several satellite populations and three core areas, the Panoche Valley, the Carrizo Plain, and western Kern County. Another substantial population that could be considered a core area is the urban population that is living in the City of Bakersfield. This population is fairly large and critical in contributing to the conservation of the species as a whole. The urban population of San Joaquin kit foxes has higher survival rates, lower dispersal potential, and higher reproductive success as well as increased incidence of philopatric young and larger family groups when compared to populations living in natural areas. The San Joaquin kit fox is a socially monogamous species, but philopatric young have been classified as Helpers because they assist in rearing future litters. Understanding how the altered ecosystem in the urban environment can affect reproductive traits of an endangered species is important for conservation. In this study I investigated the relative contributions of adult group members to pup rearing in urban San Joaquin kit foxes. My objectives were to quantify the relative time contributions of each individual, the different tasks performed by each individual, and the changes in time contributions and tasks performed by each individual as the pups aged. To quantify den attendance and behavior, I used proximity logging collars and base stations at each natal den, performed direct observations of behaviors, and set up remote camera stations at dens. I also compared these methods for efficiency in detecting behaviors. To determine role, I used behaviors and genetic analyses to classify each individual to one of three categories: Mother, Father, or Helper. To monitor changes in behavior as pups aged, I split the breeding season into three periods: Preparturition, Nursing, and Weaned. I monitored six groups at four locations in Bakersfield, California and had four groups that successfully reproduced and were consistently monitored. I found that proximity logging collars were unreliable in measuring den attendance of kit foxes. Cameras were an effective method for documenting behaviors, but they significantly underestimated the amount of time that foxes spent at the den. Direct observations were the most accurate method of gathering behavioral data and were used for analyses of parental care. I found that Mothers play a critical role in pup rearing. Mothers spend significantly more time at the den than either Fathers or Helpers. While Fathers spend most of their time away from the den, they provision the same amount of food as Mothers, whereas Helpers provisioned significantly less than either Mothers or Fathers. Mothers primarily groomed young, provisioned, guarded while young played, and performed den defense. Fathers primarily provisioned and provided den defense. Helpers mostly interacted with the pups through play, which may teach the pups the social hierarchy and establish dominance. While Helpers do not provide direct care to young, they may provide a form of insurance of parental care of young should something happen to either of the parents. Helpers are likely tolerated within their natal range because there is an increased abundance of food within the urban environment and their presence is not detrimental to the success of the current litter. I also documented two incidences of social polygyny and genetic polyandry over the course of my study. This is likely tied to the super abundance of resources because more plentiful resources result in a decreased need for paternal care and so one male can split his time between multiple litters. My results indicate that there is a decreased need for assistance in pup rearing in the urban environment due to the increased resources available. Helpers do not actually help in rearing pups and Fathers are not as necessary to successful pup rearing. Mothers play an essential role in pup rearing and are necessary for successful reproduction in the urban environment.