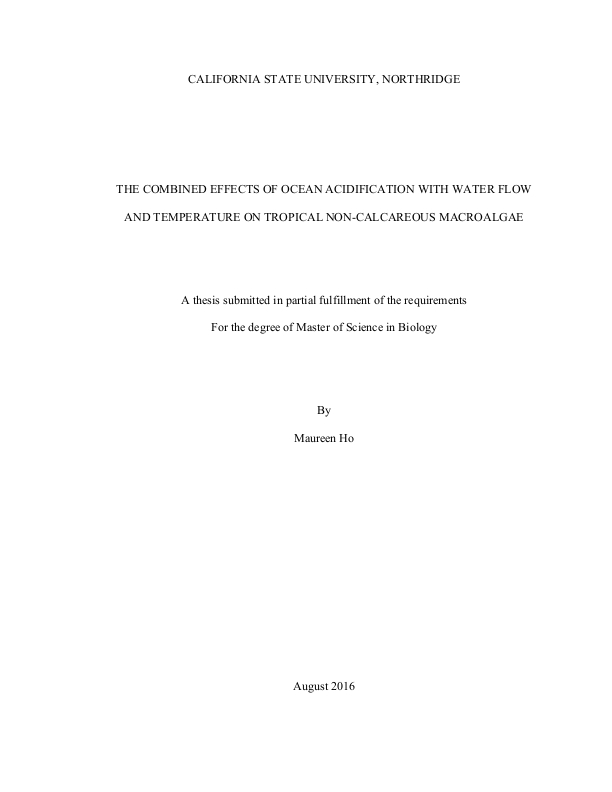 The vulnerability of coral reefs has substantially increased in the past few decades due to accelerating human-driven global change. The effects of ocean acidification (OA) and global warming individually and interactively have resulted in varying degrees of responses in benthic reef organisms. For non-calcareous macroalgae, the physiological and ecological responses to physical environmental changes can alter their relative abundances, which are often used as an indicator of the overall coral reef status. To better understand how fleshy macroalgae will respond to various physical parameters, three separate experiments were conducted from June 2014 to July 2015 in Moorea, French Polynesia. An important physical driver in transferring nutrients and dissolved gases to benthic reef organisms is water motion. In 2014, I tested the hypothesis that increased water motion and elevated pCO2 would benefit Amansia rhodantha (a CO2 user) more than Dictyota bartayresiana and Lobophora variegata (HCO3- users). The highest and lowest growth rates were at the intermediate and highest flow speed, respectively, for all three species. A. rhodantha exhibited the greatest reduction in biomass at reduced flow under ambient pCO2, indicating high sensitivity to mass transfer and carbon limitation. In 2015, the interactive effects of temperature and OA were tested in a two-part study on the metabolic (i.e. photosynthesis and respiration) and growth responses of D. bartayresiana and A. rhodantha. The first study in January 2015 showed that net photosynthesis in both species was affected by high pCO2 but not temperature, and the combination of temperature and OA affected respiration rates. In the second study in July 2015, metabolic rates were affected by temperature but not pCO2. Net photosynthesis and respiration of A. rhodantha were highest under OA conditions at 27.5 ºC, but were reduced at 30 ºC. There was no effect on metabolic rates of D. bartayresiana across all temperature treatments. The relative growth rates for D. bartayresiana were higher than A. rhodantha in the first study, while both species exhibited varying responses to treatments in the second study. Lastly, from May to June 2015, massive Porites spp. was paired with D. bartayresiana in competitive interactions at low and high flow speeds under ambient and elevated pCO2 levels. I tested the hypothesis that increased water flow would increase algal growth rates, enhancing the competitive ability of the alga against the coral. For corals, I predicted that OA and reduced water flow would negatively affect the corals, thus increasing susceptibility to algal overgrowth. Net calcification and the photosynthetic efficiency of corals were used as a proxy for fitness and health status, respectively, however neither was affected by water flow or OA. On the contrary, growth rates of D. bartayresiana were significantly reduced under low flow. The negative effects of reduced water motion on macroalgae may potentially compromise the ability of the alga to compete. The variation in water motion can affect resource acquisition and when combined with OA, can have significant implications on species interactions. These results indicate the importance of water motion in influencing macroalgal growth and provide insights to the varying responses in fleshy macroalgae to global change. Furthermore, their physiological responses may be attributed to their different carbon uptake strategies, as A. rhodantha was more sensitive to reduced flow and temperature than D. bartayresiana.