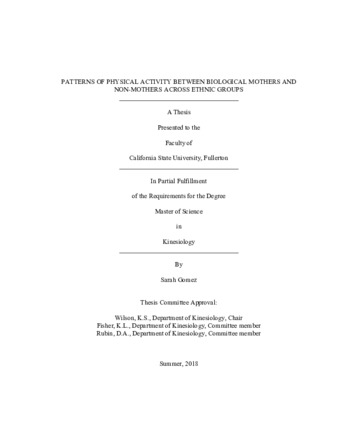 Parents tend to engage in less moderate and vigorous physical activity (PA) than non-parents but the role of ethnicity combined with parenthood has largely been ignored in studies with parents. This study aimed to see if there was an association in PA levels among ethnic groups and biological motherhood status after adjusting for covariates. It was hypothesized that biological mothers would engage in less MVPA compared to non-mothers, and engage instead in more light activity and household activity. Further, it was hypothesized that mothers of different ethnic groups would vary in their self-report (household PA, transportation PA, MVPA) and objective physical activity levels (sedentary behavior, light PA, MVPA) due to cultural variations across ethnic groups. This study was a secondary analysis of the NHANES 2005-2006 dataset and used self-reported and objective PA. Participants included biological mothers (n=473) with children under five years of age and non-mothers (n=361) who did not have a child living with them across different ethnicities (Mexican-American, other Hispanic, non-Hispanic White, non-Hispanic Black, multiracial/other race). a generalized estimating equation model showed that, after controlling for covariates, biological mothers (M adjusted=297.5 min/day, SE=8.9, p<0.001) engaged in more light PA compared to non-mothers (Madjusted=241.3min/day, SE=10.5; p<0.001). Mothers also self-reported less MVPA (M Madjusted=170.8 min/week, SE=33.6) than non-mothers (M adjusted=358.3, SE=94.0; p=0.034) but this was not seen in objective MVPA (p=0.705). for vigorous PA, there was a significant interaction (p=0.009) with White non-mothers (Madjusted =2.1 min/day, SE=0.6) reported more vigorous PA than Mexican American (Madjusted =-0.1 min/day, SE=0.5) and other/multi-racial non-mothers (Madjusted =-0.7 min/day, SE=0.7). Although mothers report engaging in less leisure time MVPA, they participated in higher volumes of light intensity physical activity, which may lead them to engage in more overall physical activity though out the day than non-mothers.