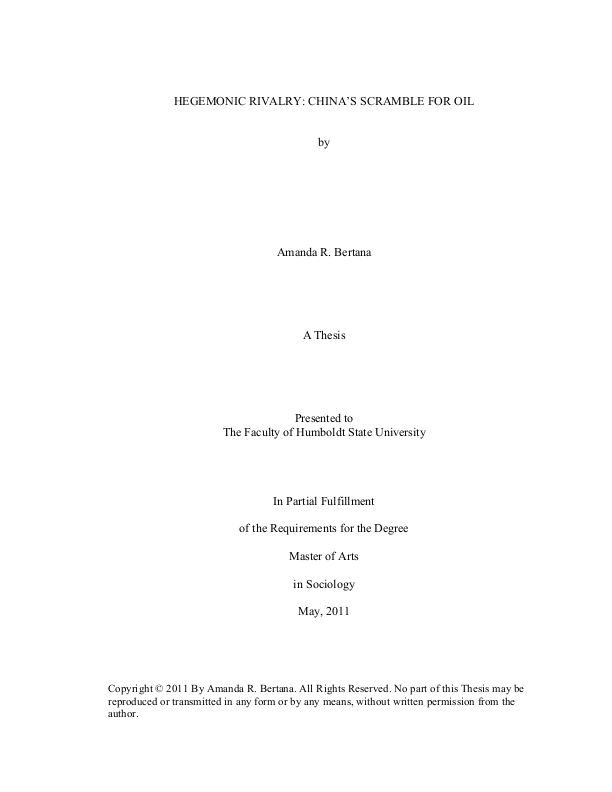 The ever-growing volatility in the Middle East is creating a need for countries to diversify their oil source. As the world’s dependency on oil grows, the competition for its diminishing supply becomes more aggressive. Nations that were once considered Third World, such as China and India, are joining the rest of the world in the race for oil in order to raise their international status. While the current superpowers are experiencing economic distress, some of these former Third World countries are experiencing economic success. China, for example, is attempting to stabilize its economy by monopolizing oil reserves. The final determining factor in restructuring the current global hierarchy and shifting hegemonic power matrix is the race for oil, in which Africa is the target. The current monopolizing of oil in Africa by China is reaping criticism as being similar to “neocolonialist” practice. In this current era, Europe and the United States are not the colonizers, as it had been in the past, but it is primarily China that has a foothold on Africa’s oil. China has created a business relationship, but more importantly a “friendship” in order to access African oil. The leaders of China stress the fact that they can empathize with Africa because they were too victims of imperialism by the West. Beyond empathy, China has a past with Africa, embedded in liberation movements during the 1970s to help build Africa’s infrastructure, so it could liberate itself from colonization. This common ground has created an instant camaraderie between the two nations, to the extent that the political leaders of China and Africa have created a Forum of China African Cooperation. The leading oil suppliers in Africa are Angola, Nigeria, and Sudan, and unfortunately these countries have corrupt governments, and participate in genocide, and other crimes against humanity such as in the case of Sudan. China continues to support these governments and economies despite these conditions. It is part of its foreign policy not to discriminate against nations based on their internal situation. Yet, China is receiving criticism from other nations, NGOs, and others for supporting the corruption and genocide in Darfur. This thesis is intended to look at the importance of oil and its role in the relationship between China and Africa. China argues that it is a nation’s right to economically flourish and build its infrastructure, but the case in Africa, specifically Sudan, Angola, and Nigeria is problematic due to its internal affairs. The question that arises is China exploiting the political instability in Africa so it can gain access to African oil in order to raise its international status?