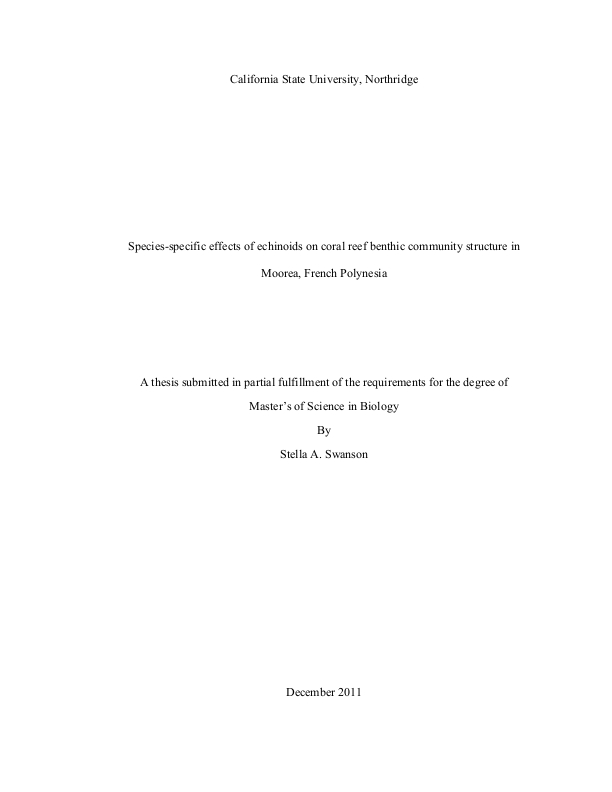 Recent studies suggest that species identity is of great importance in determining how herbivores structure coral reef communities. This study provides evidence that echinoid species differentially shape the community through unique feeding strategies and abilities. In Moorea, French Polynesia, the echinoids Diadema savignyi, Echinothrix diadema, Echinothrix calamaris, Echinometra mathaei, and Echinostrephus aciculatus differ both morphologically and behaviorally. They range from grazers, traveling distances of meters at night, to others utilizing a suspension feeding strategy and these differences impart differential abilities to influence the benthic community. By examining benthic community patterns on the coral reefs of Moorea on a small (<1 m2) spatial scale and at a larger (individual coral bommies several m2 in size) scale, this study reveals species-specific effects of echinoids on benthic community structure. Analysis of photoquadrats (25 x 25 cm) surrounding Echinometra mathaei and Echinostrephus aciculatus revealed that they are associated with benthic cover of crustose coralline algae and algal turf, respectively. Multivariate analyses revealed that on the scale of individual coral bommies only D. savignyi is correlated negatively with macroalgal cover and positively with coral cover. Despite having a less robust Aristotle's lantern, D. savignyi has greater mobility than E. mathaei and therefore likely removes more macroalgal biomass per unit area per time. The differential ability of the echinoids D. savignyi and E. mathaei to reverse a phase shift from macroalgal dominance was tested by manipulating echinoid densities on artificial reefs established with the macroalga Sargassum pacificum. Macroalgal cover decreased significantly only on reefs with D. savignyi, indicating a greater ability of D. savignyi than E. mathaei to alter community structure and potentially reverse a phase shift from macroalgal dominance back to coral dominance. These results are consistent with benthic patterns found on Moorea coral reefs and demonstrate the ecological importance of species-specific interactions shaping reef communities. A second portion of this study examined the distribution, abundance, and unique feeding behavior of the echinoid Echinostrephus aciculatus in order to understand the different role these echinoids play on contemporary coral reefs. Most echinoids function as grazers on the benthos and occasionally capture drift macroalgae from the water column. E. aciculatus, however, appears to be a suspension feeder, and unlike many reef echinoids, does not influence benthic community structure adjacent to their burrows. Feeding experiments in a laboratory flume demonstrated E. aciculatus captured pieces of the macroalga Sargassum pacificum and were more successful at capturing algae in flow speeds similar to what they experience in the natural environment (12 cm/s) compared to high (26 cm/s) flow. However, periods of high water motion likely are important for dislodging and delivering macroalgal fragments to the backreef environment and under these conditions large quantities of drift algae may provide a critical food source to these suspension-feeding echinoids. In the field, E. aciculatus were 2.25-times more abundant, exhibited larger test sizes, and had greater gonad indices in habitats close to the macroalgal-dominated reefcrest compared to 200 meters downstream and in this location, there was a greater quantity of drift algae available. These findings suggest that the distribution and success of E. aciculatus is driven by food availability, which is greatest behind the reefcrest in comparison with downstream habitats. If coral reefs continue to transition toward macroalgal dominance, species such as E. aciculatus may benefit from increased particulate drift algae and become a more prominent member of these coral reef communities.