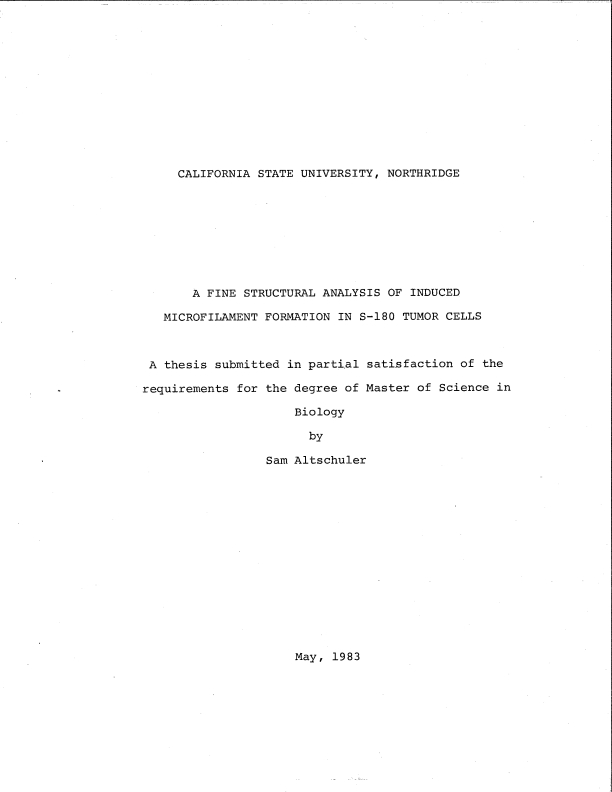 S-180 ascites tumor cells were treated with various reagents which induce polymerization of intracellular actin in other cell types. S-180 cells were used because they have short actin microfilaments, no long actin bundles and weakly-structured surface microvilli as compared with normal fibroblasts which have an extensive actin microfilament network, long actin bundles and microfilament-structured microvilli (Pollock, 1978). In vitro and in vivo experiments have shown a relationship between pH and polymerized actin with the lower threshold for actin polymerization being about 6.8 (Monroe and Pollock, 1979). S-180 cells have an intracellular pH of approximately 6.5 compared with a normal cell pH of 7.2, and this difference suggests a possible regulatory role for pH in actin polymerization (Leung and Pollock, unpublished). This study examines the hypothesis that the low intracellular pH of S-180 cells accounts for the disorganized microfilament status of these cells. S-180 cells were treated with various concentrations of NH 4+, Mn++, ca++, K+ and Mg++ ions in culture media at a pH of 7.8. The fixative for the treated cells included tannic acid and saponin to facilitate positional resolution of polymerized actin. Exposure of the cells to 0.020 M NH 4+ resulted in a rapid conversion of the neoplastic, flaccid, microvilli into an erect or extended conformation. These extended microvilli contained 60 Å diameter microfilaments in bundles, the cytosol showed microfilament networks, short filaments connected to ribosomes, and 100 Å diameter intermediate fibers were observed in the perinuclear region. The number of the extended microvilli decreased with time in culture, but the other results persisted. A 0.0875 M Mn++ concentration induced extensive exocytosis of lipid bodies and a retraction of the flaccid microvilli from the cell surface. However, a 0.020 M concentration of Mn++ combined with 0.020 M NH 4+ provided results similar to the NH4+ treatment alone, except that there were fewer extended microvilli and they were less erect. Mn++ enhanced the cell surface contrast by binding to the plasma membrane and the glycocalyx. Longer, but flaccid microvilli containing only short microfilaments were observed when 10 μM Ca++ was introduced to the cells by ionophore A23187. Intermediate fibers were more developed than in the other treatments and fewer microfilaments were observed in the cytosol. Fields of microtubules were seen and the polysomes were three times as dense as compared with the NH4+ and the NH4+ plus Mn++ treatments. In conclusion, Mn++ did not induce actin polymerization. ca++ A23187 ionophore promoted microvilli extensions, intermediate fibers and polysome elongation, but not actin bundles within the microvilli. However, NH 4+ had a profound effect on microfilament formation and did produce actin bundles in extended microvilli, intermediate fibers and microfilament networks. Since NH 4+ and ca++ ionophore exchange for intracellular H+ caused a rise in intracellular pH, the effects are interpreted as evidence that pH, singly or in combination with other factors, regulates actin polymerization in S-180 cells.