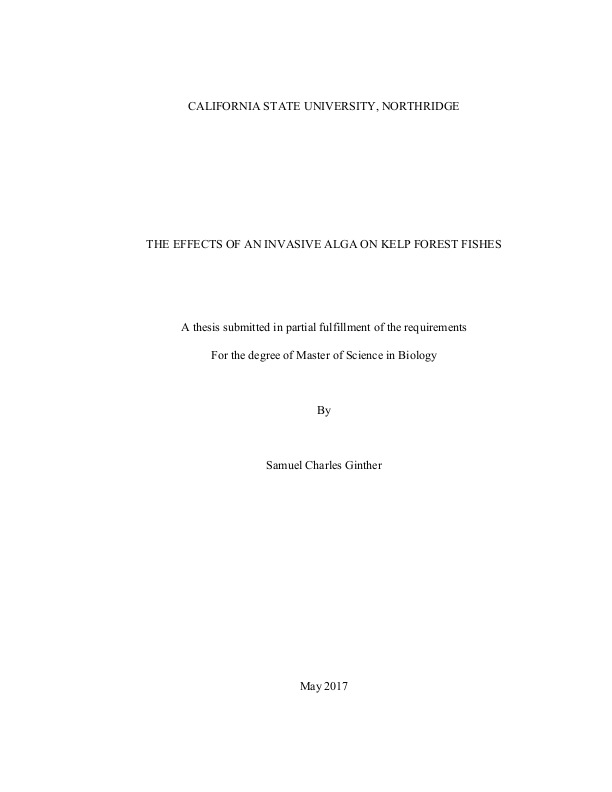 Effects of an invasive alga on kelp forest fishes

The susceptibility of ecosystems to the introduction of non-native species has increased drastically with the development of advanced transportation technologies. It is now quite common for organisms to be easily transported by humans across physiological, ecological, or behavioral barriers that once served as natural population constraints. Despite this increased rate of introductions to locations that were previously unreachable, most organisms that are introduced perish because they are not able to withstand the new environmental pressures of the introduced location, or there are simply not enough conspecifics to perpetuate the population. However, when introduced organisms are able to thrive and reproduce, they may have devastating economic or ecological consequences. A new opportunity to document and understand the effects of an invasive alga on native community members has presented itself in southern Californian waters. Native to northeastern Asia, Sargassum horneri is a macroalga that was presumably transported in ballast water and discovered in Long Beach Harbor in 2003. By 2006 it had spread to the western side of Santa Catalina Island, California, and within a year spread along the entire leeward coast, forming dense stands in numerous areas. Although not all exotic species are ecologically harmful, S. horneri has attributes (fast growing and occurs in high densities) that may allow it to readily establish and outcompete marine flora critical to the community structure of fishes. The purpose of this study aimed to document the effects of S. horneri on kelp forest fishes at Santa Catalina Island, California. I first employed observational, correlative methods to explore the role of S. horneri in shaping biotic and abiotic habitat characteristics of reefs and fish assemblages. I also explored habitat characteristics that predict fish assemblage structure, as well as species-specific responses of fish to habitat predictor variables during 4 distinct time periods. Fish assemblages changed over the course of my 4 sampling periods, and a number of habitat variables (including S. horneri) explained variation in fish assemblage during those times. However, there is more evidence that favors M. pyrifera as a driver of fish assemblage change, as indicated by species-level responses. Additionally, a field experiment testing whether the removal of S. horneri from reef areas affected the fish assemblage was used to evaluate whether patterns documented in the observational portion of my study that could be attributed to S. horneri do in fact appear to be caused by the invasive alga. Removing S. horneri from established areas of reef did not affect multivariate or univariate metrics of fish assemblage over the course of 7 sampling periods. Removal and control (unaltered) areas of reef contained strikingly similar fish assemblages, fish richness, and fish densities over time. Despite a drastic change in reef landscape, it appears that M. pyrifera, rather than S. horneri, was a more significant driver of differences in kelp forest fish assemblages observed in my study. Second, I compared the role of relatively low-lying S. horneri and vertically extensive M. pyrifera in shaping recruitment patterns of a popular sport fish (Paralabrax clathratus) by using an observational and experimental study. I first examined kelp bass recruit abundance on naturally standing S. horneri and M. pyrfera to better understand how fish recruitment rates differ between the introduced and native species. Additionally, I experimentally isolated 3 treatments (M. pyrifera only, S. horneri only, and M. pyrifera and S. horneri together) over a sandy bottom to understand whether the presence of S. horneri, and increased benthic complexity for young fish, enhances kelp bass recruitment. An overwhelming majority of kelp bass recruited to M. pyrifera, and larger recruits were located in the bottom two-thirds of the thalli. Kelp bass recruitment was were observed with S. horneri, regardless of whether the alga was alone or paired with M. pyrifera. Similar to my observational results, larger kelp bass recruits were observed in the bottom third of M. pyrifera treatments. Additionally, I found that that the presence of larger, predatory conspecifics explained a spatial pattern of declining recruitment rates across treatment plots. My study presents the first evidence that S. horneri negatively impacts the recruitment of an important southern California reef fish. Results from both of my studies offer contrasting outlooks on S. horneri's role in southern California kelp forests. When focusing on the entire fish assemblage, little evidence is in favor of S. horneri as a driver of kelp forest fish structure. However when focusing on a particular early life history characteristic of a common kelp forest fish, the effects of S. horneri are dramatically negative. The contrasting results of my studies are important reminders for the need of additional studies to generate a more comprehensive understanding of this invasive alga's impact on kelp forest organisms.