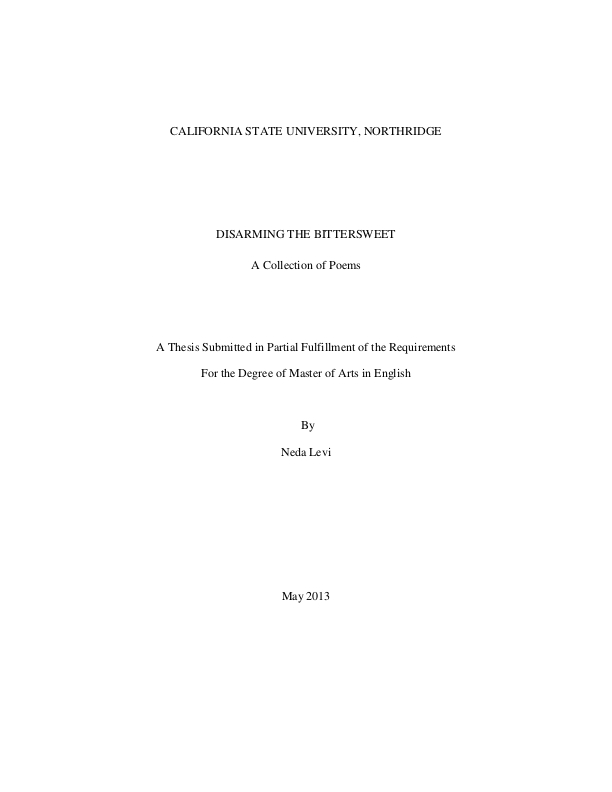 As a poet, the one thing that I find the most redemptive is the power of confession that language affords me, even though within that power lies a struggle of bittersweet magnitude. My poetic confessions speak to the torrential downpour of an unpleasantly lovely instance called childhood, a time of simplicity and complication, a time which subsists on two contradictory planes. The path that a confessional poet travels can be identified as one navigated by their experiences; personal experiences that range in effortless to difficult proportions, and it was through the art of poetry that I realized that there was no need to further silence my own. Adopting the voice of verse offered the chance to speak in the midst of trauma. Disarming the Bittersweet is the vehicle I used to explore the paths that I have walked through, first as a writer interested in the past and second as a daughter who is grappling with the idea that there are two paths vying for her attention - one that exorcizes her demons and the other which counterintuitively yearns to maintain the despair. Fashioned upon the base of Psychoanalytic theory, these poems encompass my attachment to what represents the past, be it for better or for worse. Recurrent themes which revolve around mental abuse, the comatose absence of what was once a present paternalistic figure, the fear of sexual intimacy, the unraveling of marriage, and the simplicities of childhood wonder serve as the basis of this present struggle; the need to identify myself as a poet inseparably linked to the past. In this collection, the poetry mirrors the snide pull of the past and its charming knots and wounds, particularly with regard to the overarching male figure-the utmost symbol of patriarch. In these individual pieces, I have confessed my undying devotion at the feet of my father and waited in hopes of reciprocity. These confessions have highlighted the notion that I am sometimes lost in the bittersweet wish that the days of naiveté are there for the taking. Disarming the Bittersweet defines the struggle to maintain the only thing that I must defuse in order to save my sanity. I am self-aware, an autonomous body composed of revelations, and the narrative of my past is the only lifeline I have left. Through vivid chronicles calling to attention the vitality of my past, this collection illustrates the foundation of a carefree adolescence flawed by the catalyst of the instability that transpired and then rejects the polarization of the experiences reflected, therefore resulting instead in the flourish of their union. This collection embarks on a journey of engaging conversation with memory; to implant the experience of what once was and will never again be, of the bitter and the sweet, into one of present necessity. What is rewritten is the undying realm of a confessional poet's past, wherein with a heavy hand the faint lines of peace and panic transposed upon one another during childhood are once again traced, heartened in the hue of immortality.