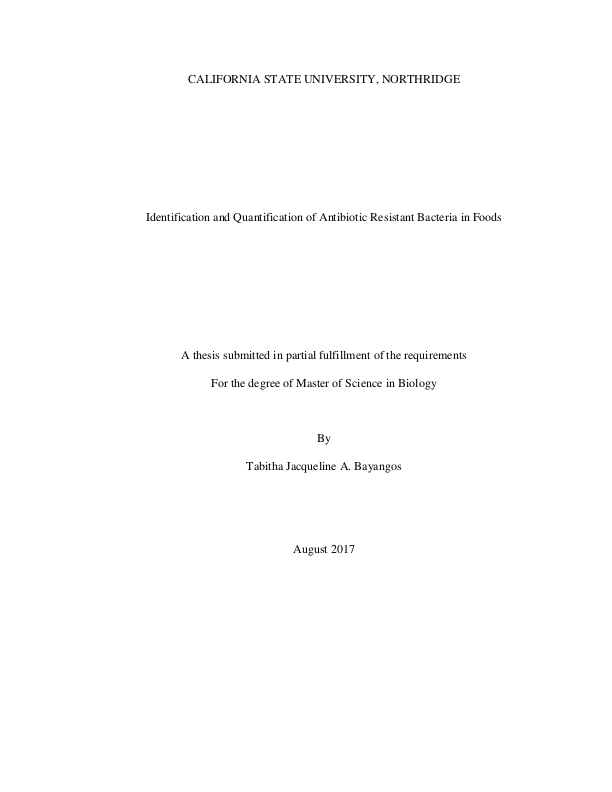 Identification and Quantification of Antibiotic Resistant Bacteria in Foods

Approximately 80% of all antibiotics in the U.S. are used in food production (FDA, 2010), which has the potential to generate large reservoirs of antibiotic resistant bacteria (ARB) in the food supply. Our study aims to establish overall ARB loads that various types of foods are carrying to begin to determine potential exposure risks for consumers. Raw conventional and organic fresh produce, seafood, poultry, pork, and beef, as well as antibiotic-free poultry, pork, and beef samples were quantified for total bacteria loads resistant to 8 different antibiotics. Meat and poultry samples were then cooked to the recommended USDA internal temperature and re-sampled for effect on different ARB loads. We found that conventional produce (6.59 0.3 log CFU/g) had a higher overall level of ARB compared to organic produce (5.06 0.3 log CFU/g) with Pseudomonas and Shewanella being the most common genera. The average ARB load for conventional meat and poultry (3.25 0.4 log CFU/g) was slightly lower than organic (3.54 0.5 log CFU/g) and antibiotic-free (3.53 0.5 log CFU/g). In general, ARB in pork (3.78 0.6 log CFU/g) was slightly higher than beef (3.41 0.5 log CFU/g) or poultry (3.1 0.5 log CFU/g). While raw fish had an average higher load of 6.01 0.4 log CFU/g of ARB than meat and poultry. Across all sampled products, resistance to gentamicin was lowest, while resistance to cefotaxime was the highest. Cooking reduced or eliminated the ARB load regardless of the type of meat or poultry product, with Stenotrophomonas and Pseudomonas being the most common survivors of cooking. Additional experiments inoculating ground beef with the plasmid DNA (pBR322), encoding for tetracycline and ampicillin resistance genes, in various forms (naked DNA, dead Escherichia coli, or live E. coli), could be recovered from raw and cooked samples, but only in the presence of live E. coli. This study demonstrates that meat and poultry no matter the label (organic, conventional or antibiotic-free) as well as fresh produce have ARB loads, which may serve as vectors for the transmission of antibiotic resistance genes to human pathogens or commensals. Although cooking dramatically reduces ARB loads, plasmids and DNA encoding antibiotic resistance genes can survive the cooking process in these bacteria, and may still be available for transformation into other bacteria.