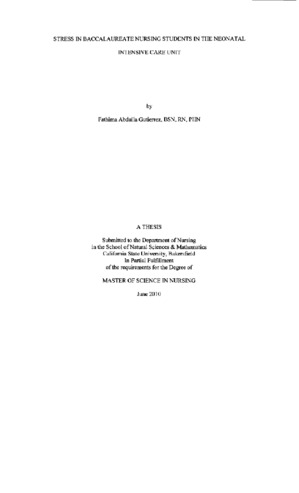 The purpose of the initial research study was to determine if a relationship existed between the stress and age of parents with infants in the neonatal intensive care unit (NICU). Due to unforeseen complications obtaining research approval from the local hospitals, the population was changed, and perceived stress was examined in baccalaureate nursing students following at least one encounter (clinical day) in the NICU. The research question was revised to: “What is level four baccalaureate nursing student perceived stress after attending at least one clinical day in a neonatal intensive care unit?” This was a quantitative exploratory study and utilized a descriptive, correlational design. The Parental Stressor Scale: Neonatal Intensive Care Unit (PSS: NICU) was revised for use with nursing students and permission from Dr. Miles was obtained to utilize the revised PSS: NICU. Potential subjects were nursing students in a level four course, Nursing 444: Professional Nursing Practicum and were approached by the researcher. The researcher asked the professors to leave the classroom and the research was explained to the subjects. Nursing students were offered a packet which included a demographic sheet, the revised Parental Stressor Scale: Neonatal Intensive Care Unit (PSS: NICU), and two informed consent documents, one for them to sign and one for them to keep. The revised demographic sheet included the nursing student’s age, gender, ethnicity, marital status, employment status, occupation, number of days spent in the NICU, whether the student had children, had ever had children in the NICU, and if so, then they were asked the diagnosis and outcome of that child. Not surprisingly, it was determined that the baccalaureate nursing students rotating through the NICU did in fact experience stress. The Mann-Whitney U test was utilized to compare the different groups. However, this study found that there was no statistically significant difference in the stress experienced among the different age groups. Furthermore, there was no statistically significant difference in the stress experienced by nursing students with and without children. The one nursing student with a history of having a child in the NICU reported a higher stress level than the other students, but significance could not be determined due to the small sample size. Additionally, the stress level of the baccalaureate nursing students was similar to that of the parents of infants in the NICU as suggested by previous research studies. This study was able to determine the areas of the NICU that produced the most and the least amount of stress. Students experienced the most stress in response to the sudden noises of the monitors and alarms, seeing the baby change color, and seeing the baby stop breathing. Students described the least amount of stress in response to the other sick babies in the room, the large number of people working on the unit, and the wrinkled appearance of the baby. Recommendations for future research included obtaining a larger sample size, including subjects from an associate degree in nursing program, and for data collection to occur soon after the clinical rotation in order to obtain more accurate stress scores. Considering the lack of literature concerning the subject and the findings of this study, a need exists for continued research in the area of stress in the NICU environment.