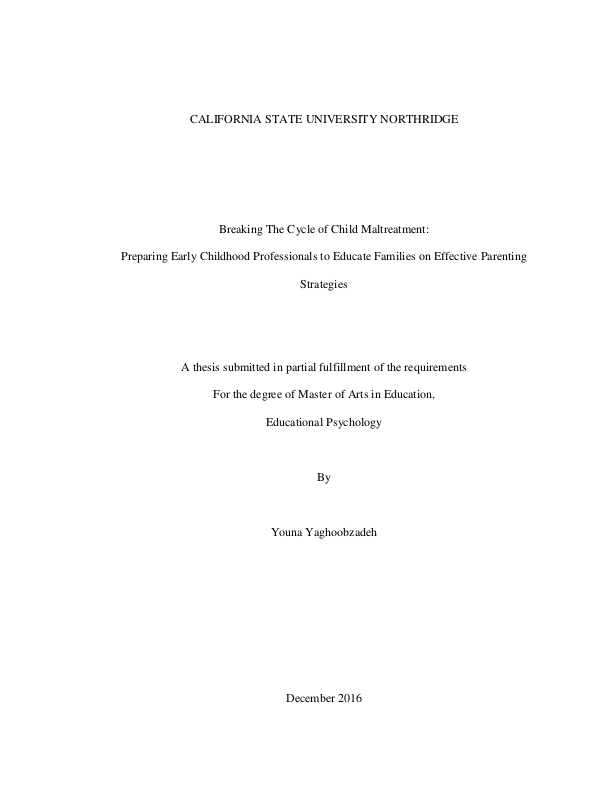 According to the existing literature, "the majority of reported incidents of child abuse are the result of parents' attempt to discipline or control the behavior of their child" (Sanders & Pidgeon, 2011, p. 200). Because very few parents receive information on how to use positive discipline techniques, many repeat the maladaptive responses that they experienced as a child, which further perpetuates the cycle of child maltreatment (Saunders, Piazza, Jacobvitz, & Swann, 2012). Freysteinson and McFarlane (2014) suggested that if early childhood educators and clinicians are able to equip parents with the necessary tools, skills, and knowledge to engage in positive parenting behaviors, we may increase the likelihood of reducing and/or preventing child abuse and its devastating effects. However, many early childhood professionals receive little or no formal training to work with parents in using positive behavior guidance with their children (McFarland-Piazza & Sanders, 2012). Given the findings of such studies, it may be valuable to first understand the most common underlying reasons behind parents' dysfunctional behaviors before we attempt to eradicate these behaviors. In the present study, 24 undergraduate students, who were enrolled in a child development course, were asked to assume the role of a parent/guardian and respond to a series of three questions (pre-survey) pertaining to why and how they would handle a toddler's challenging behavior. Common themes that were revealed in students' responses to the pre-survey questions are discussed in Chapter 4. Furthermore, to address the lack of training early childhood professionals receive in positive behavior guidance techniques, the present study sought to evaluate whether a 30-minute presentation, discussing the interconnection between child development theory and positive parenting practices, would change students' negative responses in the pre-survey to more positive responses in the post-survey. The results of the post-surveys indicated that more than half of the participants indicated that they would implement a more positive discipline approach after hearing the presentation. Potential limitations of the study, ideas for future research, and implications will also be presented.