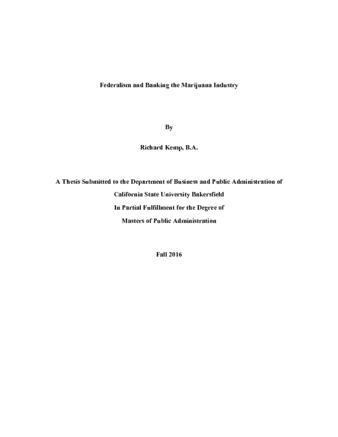 Federalism and banking the marijuana industry

Marijuana is listed as a Schedule I narcotic under the Controlled Substance Act of 1970. Schedule I narcotics are perceived as having- no acceptable medical use, having a high danger for abuse, and being considered unsafe under medical supervision. As of 2014, 23 states and the District of Columbia have legalized marijuana for medical purposes, and four states and the District of Columbia have legalized marijuana for recreational purposes. Because marijuana is prohibited under Federal law, and the Commerce Clause of the United States Constitution declares all Federal law supreme to State law. Therefore, States have to succumb to the Controlled Substance Act of 1970. However, States have claimed that under the Anti-Commandeering doctrine, they cannot be coerced by Federal authorities to implement any federal policy. Upon election in 2008, the Obama administration implemented the Ogden Memo, calling for federal prosecutors to exercise discretion towards medical marijuana patients complying with their state’s marijuana policies. In November 2012 Colorado and Washington legalized marijuana for recreational use. In August 2013, the Obama administration released the Cole Memo, establishing a new set of federal priorities in marijuana enforcement, establishing guidelines of Cooperative Federalism. However, even in spite of the Obama Administration’s new approach, setbacks of Federal supremacy have persisted. Under the Bank Secrecy Act and the Money Laundering Control Act of 1986, banks face severe penalties for laundering the proceeds of illegal enterprises. In response to lack of access facing state legal marijuana businesses, Washington Governor Jay Inslee and Colorado Governor John Hickenlooper wrote to the Federal Reserve Board of Federal financial regulators expressing their concern over the banking dilemma. In February 2014, The Justice Department released the Cole Memo of 2014, which reiterated the Federal guidelines of the prior Cole Memo of 2013. The Treasury Department memo released by the Financial Criminal Enforcement Network (FinCEN), provided instructions to banks on how to do business with state legal marijuana businesses. Unfortunately, the FinCEN guidelines of 2014 did not subject any federal prosecutorial immunity to banks. Because banks are still liable to prosecution, less than one percent of banks have been willing to provide financial services to state legal marijuana businesses. In sum, further incremental action is needed. In my research, I conduct a qualitative content analysis in determining a practical solution to resolve the banking dilemma facing marijuana businesses. Since 2013, four bills have been proposed in Congress, which are likely to hold a solution to the banking dilemma. Although subjective, the most common thematic elements will indicate particular approaches in resolving the banking conflict. The bills proposed in congress will be the top-down solution. The bottom up solution will pertain to the state of Colorado’s cannabis co-op policy, implemented on June 6, 2014. Upon my recommendation, I remain determined that Federal Supremacy still exists in regards to banking laws. However, a new framework of Cooperative Federalism, being the Cole Memo and FinCEN guidelines, have attempted to mitigate the problem. Although each were practical within the incremental process, however, a new incremental solution is needed. A new solution would be to immune banks from facing penalties for providing financial services to marijuana businesses. However, within this approach, Cooperative Federalism will be necessary. Therefore, within any new approach, Federal guidelines will be necessary; which could very well pertain to the Cole Memo and the FinCEN guidelines. In essence, banks will be granted prosecutorial immunity, and effectively adhere to the set Federal guidelines.