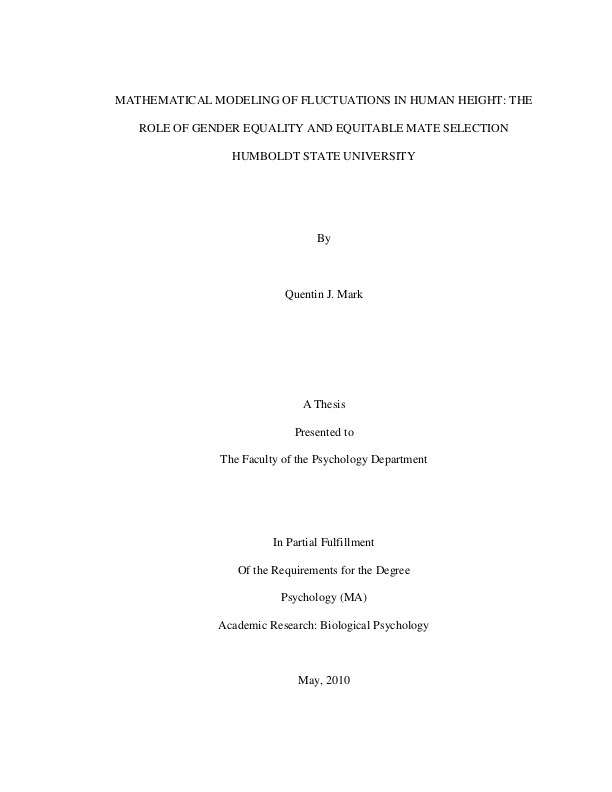 Mathematical modeling of fluctuations in human height : the role of gender equality and equitable mate selection

The rapid increase in European height during the mid to late nineteenth century has yet to be fully explained. Improved nutrition and decreased pathogen exposure can account for some, but not all of the observed increase in average height for particular European countries during this period. A new model is proposed that incorporates evolved psychological preferences for taller mates in addition to effects of improved nutrition and sanitation. In humans, height correlates positively with social status, economic well-being and reproductive success, and the preference for height in human mate selection shows key hallmarks of an evolved psychological trait that arose through sexual selection. However, cultural practices can sometimes override evolved psychological traits. I argue that practices such as arranged marriages and political disenfranchisement of women, which were common in Europe until late 19th century, suppressed the effect of sexual selection for height. However, as European cultures became more socially progressive, sexual equality increased, allowing innate mate selection preferences to be expressed more fully. I use a cultural historical analysis and population genetics modeling to show that, in three European countries, average height increased rapidly after cultural changes that led to greater freedom in female mate selection, and that the rate and degree of height increase fits well what would be expected from a sexual selection process. Sweden and Portugal are used as case studies to test the relationship between gender equality and the expression of sexual selection for height. Archival records of population heights and distributions were collected from previous studies, military registries, government censuses and statistical records. Using estimates of the heritability of and sexual selection for height, a population genetics model was created to explore the rapid evolution in height. This paper expands upon previous quantitative genetics models of population height increases by factoring in cultural changes that affected the expression of an evolved mate preference for height. A non-linear difference equation model was generated which included sexual selection pressures, heritability statistics, and quantified measures of gender equality. For each of the countries examined, my model yields estimates of average population height increases that closely fit observed height changes. Results suggest that changes in cultural norms in the late 19th century in Sweden and Portugal unmasked an innate mate selection preference for height. Increased freedom of mate selection led to a period of average population height increase that is attributable in part to sexual selection. This new model of changes in human height, by incorporating psychological and cultural factors, more accurately accounts for the changes in European height during this era than do previous accounts based on improved nutrition and health alone.