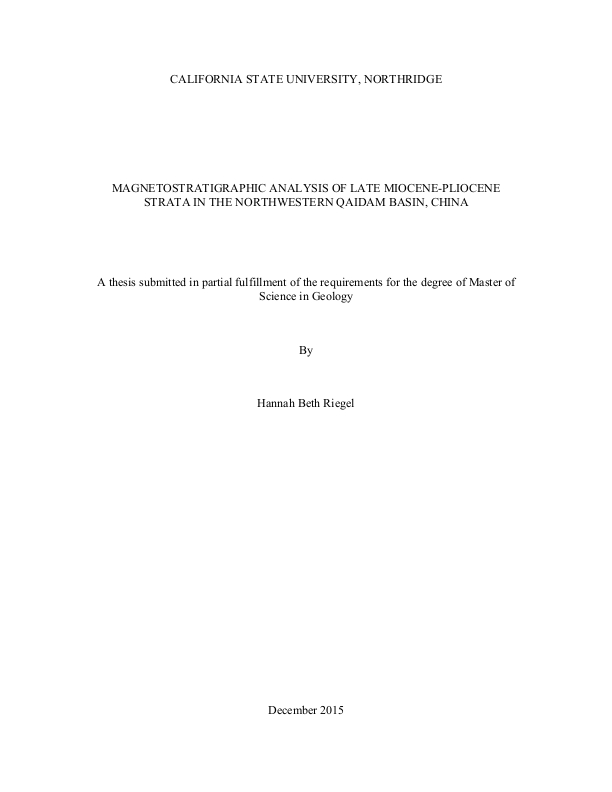 Environmental Impacts Of Rapid Climate Change At The Pliocene-Quaternary Transition In The Qaidam Basin, China

The Pliocene is a time of rapid, extreme climate variability, but geologic exposures of lacustrine strata from this time are rare, impeding observations of the impact of climate change on lake sedimentation. The Qaidam Basin (QB) in western China provides a unique geologic setting, where internally drained lakes have existed for the past few million years, and recent deformation of the basin floor has uplifted and exposed lacustrine strata. The stratigraphy presented in this thesis records a detailed history of lake level fluctuation, evaporite deposition, and climate change from one location in the QB. Samples for paleomagnetism and carbon/oxygen isotope dating were collected from the Huatugou region of the QB to document the environmental conditions present during deposition, and determine how subtle changes in evaporite concentrations changed as global climate changed in the Miocene-Pliocene. Although a 655 m section was described and measured, samples were only collected in the lower 475 m Samples were analyzed for their paleomagnetic properties and to determine the rate of sedimentation in this area. 12 magnetozones indicate an age for the lower half of the section between 6.033-033 Ma. The section consists of 9 lithofacies (1 mudstone, 4 sandstone, 1 conglomerate, 2 gypsum, 1 halite) that can be divided into 3 stratigraphic units based on evaporite concentration. Alternating mud, gypsum, and halite beds imply multiple lake-level fluctuations and occasional drying of the lake. There are two major transgression/regression, 1) ~6.033- 5.2 Ma and 2) ~5.2- 4.4 Ma, along with a gradual regression from 4.4 Ma- present. Lake transgression/regression cycles have an average recurrence rate of 100, 000 +/- 20,000 yrs, matching well with orbital eccentricity. Sedimentation rates were derived from correlating the paleomagnetostratigraphic column to the Astronomically Tuned Neogene Time Scale (ATNTS). The oldest sedimentation rate from ~6.033 Ma is 93.4 m/My. The middle, from ~5.235 Ma is 218.2 m/My. The youngest, ranging from ~4.187 Ma is 118.4 m/My. This is the rate assumed for the upper part of the section. Compared to other studies done in the Qaidam Basin, the Huatugou region began to dry out before the rest of the basin (at least 6 Ma), which is also seen by the southeastward migration of lake depocenters. Overall, the section shows shallowing of the lake throughout the Pliocene, and may correlate with uplift of nearby mountains and cooling climate.