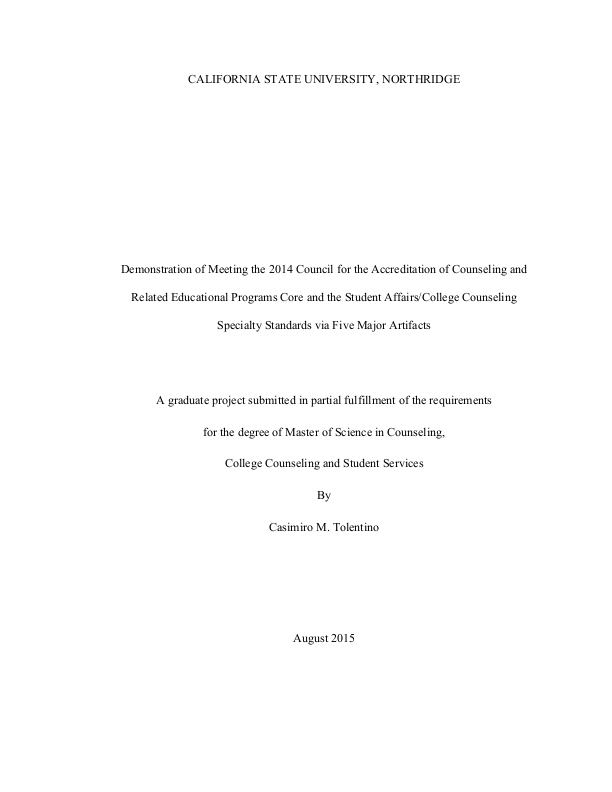 As part of my culminating project for my master's program of counseling with a specialization in college counseling and student services, I created independent papers that reviewed the response to prompts from the 2014 CACREP standards. The core standards that I address are social and cultural diversity, human growth and development, and career development. The specialty standards that I address are specialties D and F For core standard 2, I address how new students entering college are going to go through a "culture shock" when they arrive on their respective campus. This is especially true for students who may be coming from small homogenous communities, who are then, confronted by the immense diversity those college campuses present to them. As a result, students may not handle the diversity very well. College and universities have dealt with aggression and even violence toward minority groups, especially the lesbian, gay, bisexual, transgender (LGBT) population. Based on the research that is presented, this paper proposes that incoming students would benefit from having a sexual identity component in their first year experience (FYE) courses. By doing so, students will gain a better understanding on the different experiences and emotions that LGBT students will go through each day. With the increase in empathy, this will encourage a more welcoming campus environment and would lead to a decrease in acts of violence and aggression towards the LGBT population. For core standard 3, I address how leadership development programs and services are beneficial for students of color as it allows them to gain various skills that would help them succeed not only after college but after graduation as well. In addition, there is a correlation with students of color who take on leadership roles have higher rates of academic success compared to those that do not. Another aspect is that it encourages exploration of the student's own ethnic identity. In this paper, Phinney's ethnic development theory and the social change model of leadership is used to analyze the correlation between the student's leadership development and ethnic development and how affects retention. For core standard 4, I address how college counselors and student affairs professionals should encourage more career development for first-generation college students during their initial year in college. Using the social career cognitive theory, I propose that they can do this by providing more interventions based on choosing a major and encouraging them to apply for internships. Also, helping them develop healthy coping strategies that will make transition to a professional life easier In the paper for specialty standard D, I address the increasing number of undocumented students are entering college in pursuit of a bachelor's degree as a result of the passage of legislation such as California's AB 540 and DREAM Act in some states. It is essential for student affairs professionals to be prepared for their increasing numbers. This paper addresses the needs of undocumented students having limited access to entering four-year institutions immediately after high school due to financial limitations. In addition, the impact of the stigmatization and shame associated with the uncertainty of their legal status will be explored as well as how it affects their social identity and their self-image. Schlossberg's theory of Marginality and Mattering will be used to guide the research. Finally for specialty Standard F, I addressed how student affairs professionals should provide substance abuse prevention programs and interventions to student veterans. This student population is particularly susceptible because of the difficulties it faces as they transition from a strict military life to a less structured civilian and college one. One difficulty that they may be challenged by is post-traumatic stress disorder. In order to cope they may turn to abusing substances such as alcohol or illicit drugs. Using the Schlossberg's Transition model, interventions and programs can be implemented to help them. Once they are implemented the substance abuse rates among this student population should decrease and their retention and success rates should rise.