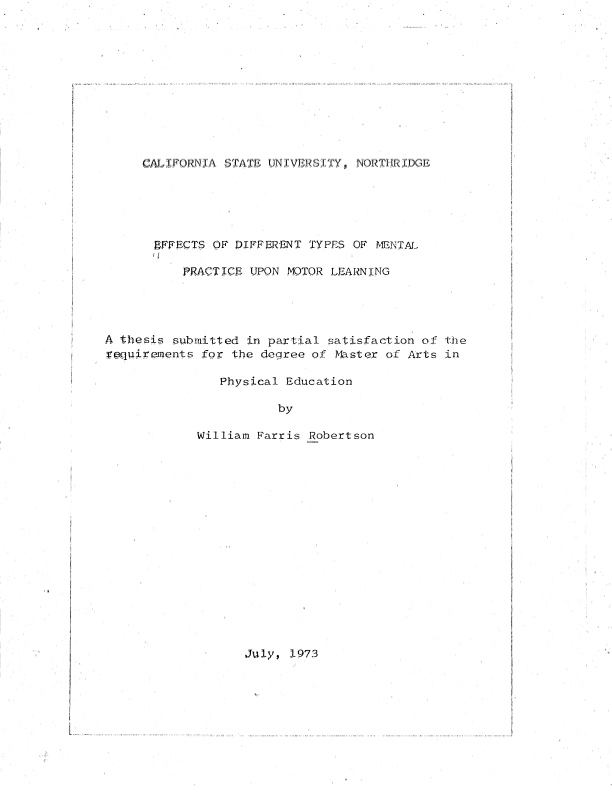 Effects of different types of mental practice upon motor learning

The purpose of this study was to compare the results of learning through a visual filmed practice, verbal taped practice, undirected mental practice, and no practice, and to determine the relative effectiveness of each method upon motor learning and performance. One hundred and forty - seven male and female students who were enrolled in physical education classes at Bethany Junior-Senior High School, Bethany, Oklahoma, during the Fall semester 1971 -72 volunteered as subjects for this study. Eighty-two of these subjects completed all practice and testing sessions. The subjects were randomly assigned to one of four groups, A, B, C, or D , each performing under a different condition; Group A, the visual practice group, relied upon visual cues from a film of the novel task; Group B, the verbal practice group, relied up on verbal cues derived from a taped recording of the novel task; Group C, the undirected mental practice group, relied upon undirected individual mental practice; and, Group D, the control group, received no practice. The ball hitting task consisted of an underhanded hitting of a tennis ball toward an archery target for points. The non-dominant hand was used and each subject received twenty-four attempts at the task. The study lasted fourteen days including seven days for the male subjects and seven days for the female subjects (boys had physical education on the even days of the month, girls on the odd numbered days). The seven-day program for each group consisted of one day for the introduction and pre-test; two days for mental practice; one day for mid-test; two days for mental practice; and, one day for post-test. The analysis of variance test was used to analyze the data. Results indicated that there was no significant difference (.05 level) between any groups throughout the investigation. The results supported the null –hypothesis that there was no significant difference in the degree of learning of a novel motor task resulting from the learning methods employed in this study, namely: visual filmed, verbal filmed, verbal taped, undirected mental, and no practice.