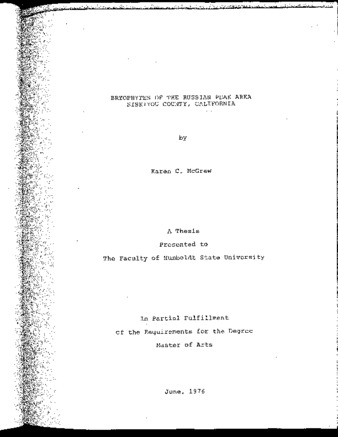 Russian Peak, at an elevation of 8200 feet, is situ­ated in the Salmon Mountains, a north-south trending range centrally located within the Klamath Region of northwest­ern California. The Salmon Mountains are drained by the Scott River on the east and by the Salmon River on the west; both rivers course northwesterly to discharge into the Klamath River. The Klamath Region is a geologically old and structurally complex series of ranges which grade into the Coast Ranges on the west and into the Cascade Mountains on the northeast. Russian Peak is located in Klamath National Forest, within Siskiyou County, approximately eight miles west­southwest of the town of Callahan. Access to the area is via Forest Service roads and·unimproved roads off of State Highway 3, which runs northward out of Weaverville. Selection of Russian Peak and its environs as a study area was based on several factors: the lack of bryological collections in the area (Personal communica­tion, Norris, 1973); the presence of relict conifer species as described by Sawyer and Thornburgh (1971); and the presence of a diverse, largely circumboreal moss population on the Marble Mountains, located approximately fifteen miles to the northwest (Spjut, 1971). The objec­tive of the following study was to identify bryophyte species within the area and to determine if the findings would lend further support to the concept of a refugium or "central" area, as described by Whittaker(l961), with­in the Klamath Region. Collections were made from around five lakes, includ­ing their headwaters and drainages, during the summers of 1973 and 1974. A total of 786 specimens were collected, representing 152 species. Collections were made at elevations between 5500 feet and 7200 feet in the following drainages: 1) Sugar Lake and Sugar Creek, August, 1973; 2) South Sugar Lake, August, 1974 (with D.H. Norris); 3) Bingham Lake, September, 1974 (with D.H. Norris); 4) Russian Lake, September, 1973; 5) Waterdog Lake, Lower Russian Lake and South Russian Creek, September, 1973. Bryophytes were collected along paths, in drainages, and from around the lakes. Effort was made to include special habitats, such as springs, marshes, serpentine outcrops, exposed granite walls, rock crevices, and areas adjacent to perennial snow patches. Each collection was identified, checked with speci­mens from the cryptogamic collection at Humboldt State University, and verified by D. H. Norris. Voucher speci­mens are on deposit at the Humboldt State University Her­barium (HSC). Collection numbers preceded by the prefix "N" are those of D. H. Norris; all others are those of the author.