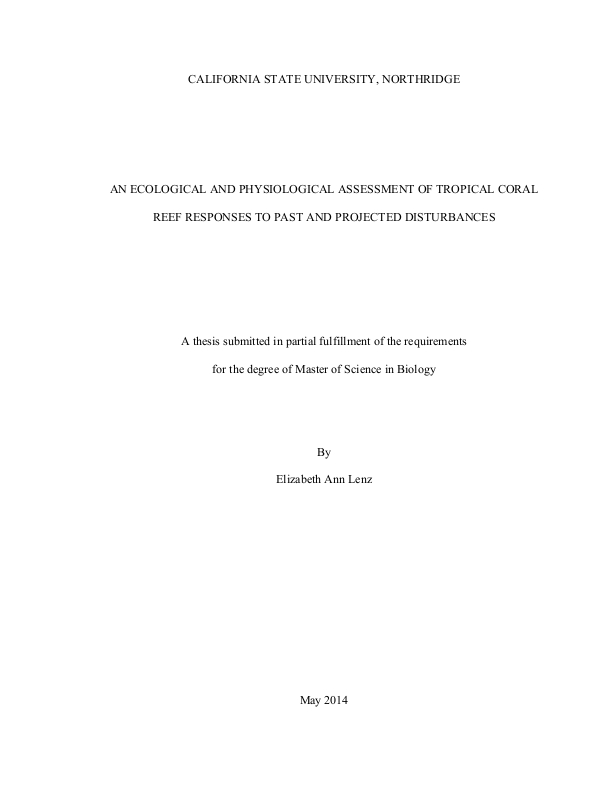 Tropical reef structure and topographical complexity is a product of coral morphology, which greatly enhances biodiversity, ecological function, and ecosystem services. However, reef-building corals have declined in cover by 50-80% in response to the accumulated effects of natural and anthropogenic disturbances over the last 3 to 4 decades. This thesis is comprised of two different studies that address potential changes in shallow reef communities and benthic structure in response to natural and anthropogenic disturbances. The first objective was to examine changes in Caribbean benthic communities as scleractinians have declined and the second objective was to determine differential responses of contrasting morphotypes of corals to acidified conditions in Moorea, French Polynesia. In Chapter 2, I assessed the abundance of arborescent gorgonians (AGs) at local and regional scales to test the hypothesis that AGs have increased in abundance on Caribbean reefs over multiple decades. In St. John, mean abundance of AGs increased 42% from 1992-2012, with each of the dominant genera (Gorgonia, Antillogorgia, and pooled genera: Sea Rods) increasing 11-221% over the same period. Regionally, the compiled data show that AGs have increased in abundance, with mean densities rising from 7.0 to 15.1 colonies m-2 over the last 45 years. This study highlights the apparent success and importance of AGs on contemporary Caribbean reefs, where scleractinian percent cover has remained at ~10%. In Chapter 3, I evaluated the calcification rates of branches and plates of Porites rus in response to ocean acidification (OA) (~800 µatm and 1000 µatm PCO2) with temperature, light and water flow. Skeletal morphology of reef-building hermatypic corals is influenced by abiotic factors, but calcification of coral skeleton is expected to decline as ocean acidification (OA) increases. Theory predicts that hermatypic corals with contrasting morphologies will differ in calcification rates due to differences in: 1) light absorption by Symbiodinium spp. for photosynthesis to enhance coral calcification, and 2) differential mass transfer characteristics (e.g., modulating the flux of dissolved inorganic carbon and hydrogen), which may mitigate the negative effects on calcification in high PCO2. In the second study, I determined that branches and plates were both tolerant of elevated temperature and PCO2. However, branches had higher variability in calcification rates than plates in response to light, and flow. Together these results of this research demonstrate two successful taxa (gorgonians and a weedy scleractinian) in tropical reef communities that have relatively high tolerances against natural and anthropogenic disturbances. Although, gorgonians and P. rus may be alternatives to formerly dominant, slow growing, and diverse communities of hermatypic corals, the functional roles and the ecosystem services they provide will likely differ.