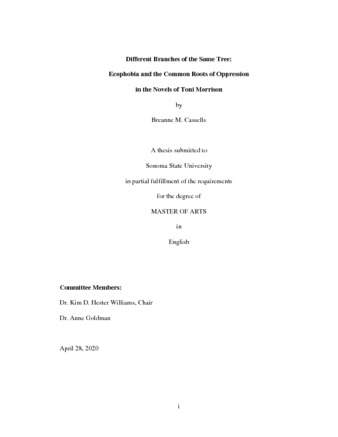 Different Branches of the Same Tree: Ecophobia and the Common Roots of Oppression in the Novels of Toni Morrison

Throughout Toni Morrison’s novels, characters struggle to reclaim their own humanity in the face of domination and trauma. While countless scholars have remarked upon the themes of oppression and language, and several others upon the symbolism of nature in her works, the symbiotic relationship between the three has remained largely unremarked upon. This project explores the similarities between white supremacy, misogyny, and the plundering of the natural world—which I refer to as types of biosubjugation—in The Bluest Eye, Sula, and Beloved. Utilizing Simon Estok’s theory of ecophobia, this project examines how the interactions between characters and the natural world are influenced by linguistic, physical, and ecological trauma. In The Bluest Eye, internalized oppression causes female characters to judge and exclude other females for their perceived dirtiness, understood in floral and/or animalistic terms. In Sula, female sexuality is conflated with and expressed through natural landscapes. In Beloved, trauma is literalized through natural elements, such as the tree on Sethe’s back and the shrubs in which Denver hides. An exploration of Morrison’s use of language clarifies her invocations of nature, which in turn elucidates her depiction of the alienating nature of oppression. These systems of intersectional oppression cause the characters to react in ecophobic ways in order to assert their own humanity, but these exclusionary tactics amputate the communal connections which are necessary to heal from communal trauma, and thus the cycle continues.